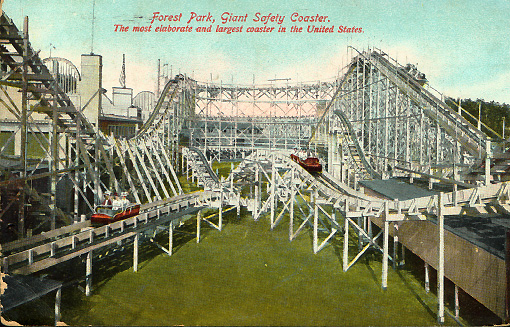 Opened in 1908 at Des Plaines Avenue and West Harrison Street, it was built as an “end of line” amusement park and was served by the Metropolitan West Elevated “L” line, surface line street cars and the Aurora and Elgin interurban rail line. The park, was quite popular, but was a noisy neighbor to the adjoining cemeteries, giving new meaning to the phrase “enough to wake the dead”.

Forest Park Amusement Park was a classic example where cemeteries and amusement shared the “end of the line” with street cars, “L” lines and interurbans. The owners of transportation companies  realized that an amusement park could well boost weekend ridership and revenues along with the hundreds of funerals in Concordia, Forest Home, German Waldheim, Woodlawn,  and Jewish Waldheim cemeteries.

The cemeteries were in place first, many years earlier, opened some 11 miles from downtown Chicago. 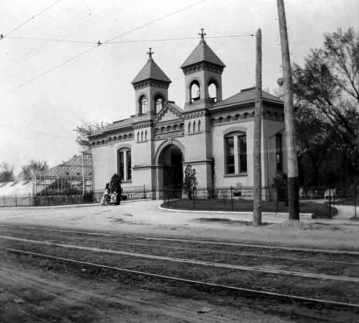 German Waldheim was incorporated a year later in 1873 and comprised 250 acres. In 1968 German Waldheim merged with and was renamed Forest Home cemetery. Forest home had over twelve miles of roadways within the cemetery using a wheeled snow plow pulled by four to six horses to clear the cemetery and also five or six miles of road to Chicago. The cemetery had a waiting room, and receiving vault connected to an ice house to preserve the bodies when the ground was to frozen to open a grave. The vault was reported to be one of the largest in the country.

Both cemeteries were created in this far outlying suburb because the city of Chicago hadbanned burials within the city limits over health fears. Before motorized hearses, funerals to these outlying cemeteries depended on funeral trains and funeral street cars because horse drawn hearses did not fare well with the formidable distance from the city and muddy rutted unpaved roads.

THEN COMES THE AMUSEMENT PARK

And then, about 1906, plans began for an amusement park right in their midst. The Forest Park Fair Grounds Amusement Company began in 1907 by  leasing 12 acres of land originally slated to be the (never built) Beach Amusement Park. The cemeteries and church leaders fought to stop that project.

THE END OF THE LINE 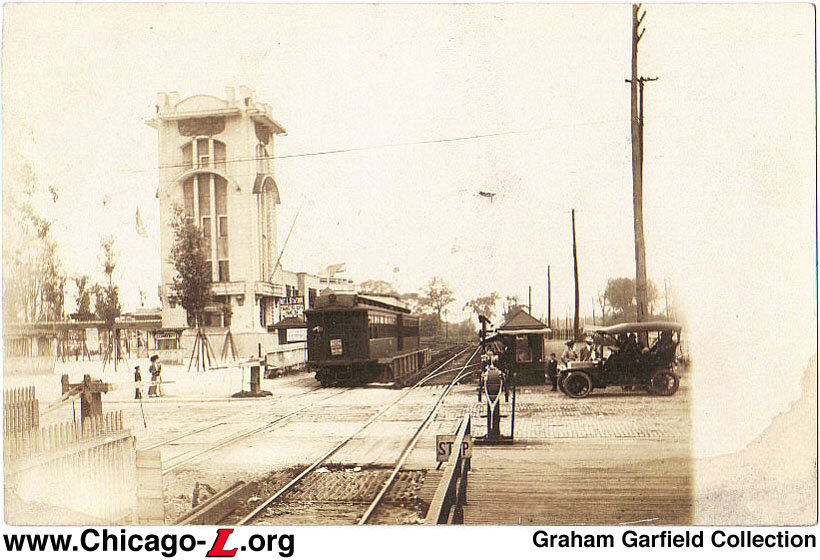 Forest Park Amusement Park was built. It was adjacent to, and served by, Chicago’s third elevated railroad franchise awarded on  April 7 1892 to the Metropolitan West Side Elevated Railroad Company  (also known as the Chicago Elevated or simply the “El”)  . It began its electrified rapid transit service in 1895 . There was also connection with the Aurora, Elgin, & Chicago interurban line.

Trains were not just for the amusement park. Both regularly scheduled trains and special Funeral trains brought mourners to Forest Park. On June 4, 1906, a joint funeral service was started between the Metropolitan West Side Elevated Railway and the Aurora, Elgin, and Chicago Railway.  Both companies owned and operated their own specially built funeral cars,  but trackage was shared through 1934.

Trackage was also extended to serve both Oak Ridge and Mount Carmel Cemeteries in Hillside. Mount Carmel actually had a train station within the cemetery. 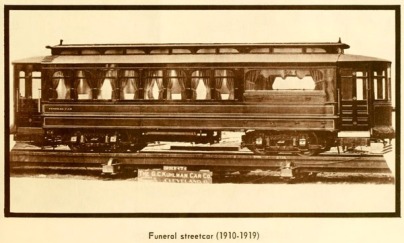 Much like most other large amusement parks, Forest Park offered roller coasters, several mechanical rides, funhouses, shows, restaurants, picnic facilities, and events. Over the years, attractions were often substituted by newer attractions to keep people returning year after year. Recycling attractions were also necessary because of its limited space of 12 acres.

Admission was often free except for weekends so come with me as we step inside the main gate, rides and concessions beckon you and your coins. 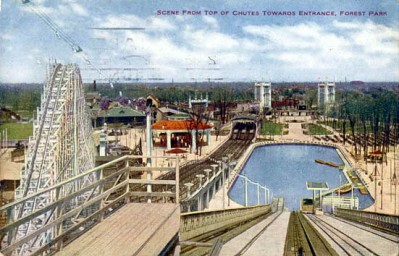 the Shoot-The-Chutes were two major and popular rides. The Chutes was also found in many other parks across the country including Riverview Park in Chicago and was a crowd pleaser for decades.

The Pneumatic Tube was quite a unique ride to Forest Park where the air was pumped out of a long, underground concrete tunnel structure. The vaccum created pulled cars full of passengers through the ride which circled the chutes lagoon. skylights at the the top of the structure provided some light.

There was a second roller coaster called “Leap the Dips” ─ a figure “8” design.

The Merry Widow Whirl was somewhat similar to two ferris wheels linked together. The term “whirl” was very common in naming rides back in the day. In various years but not all, there were the large Steeplechase ride, Spiral Wheel, the Grand Canyon, a carousel, built by the Dentzel company, and the bizarre Human Roulette Wheel which spun people off a fast rotating disk.

The Mouse Trap made of iron fencing, similar to today’s glass house mazes, was renamed the Iron Maze, visitors could ride a Miniature Railway, The Whiz, Over the Alps ride, a Venetian Swings/Sea Swing ride, or a Circle Swing.

There were many visual theatre or panorama type shows that featured disasters and events. One example was the Golden Gate where patrons rode past on a revolving floor to view a circular panorama of the 1906 earthquake.

Eating, beer, and dancing was a big part of the park. Restaurants included the large Rathskellar with a Ballroom on 2nd floor. There was the Palm Garden Cafe and soda fountain within the skating ring. 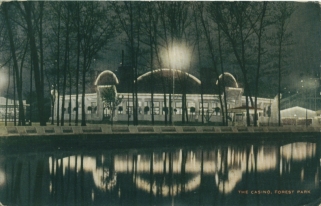 There was a Casino with a restaurant,  Grein’s Full Measure restaurant and cabaret. The Grill room, and one venue with the Tango Wheel, a revolving dance floor.

There were many of stranger productions and concessions that were common only in the day, There was Reign of Fire, Trip Thru Hell, Trip to Chinatown, Eden Musee wax museum, Terror on the Ocean, Chamber of Horrors, Panama Canal and Movie Airdrome. A visitor could visit the Hiawatha Indian Village populated by real Iroqouis Indians encamped there. There was a miniature city, and the the Crown of Thorns. There was the Jonah and the Whale diving show, A Trip to the Kaiser’s Lantern, a short lived concession called “Kill the Kaiser”. Porter’s Freak Animal Show, the 20 in 1 Platform (Freak) Show, a trip to Pike’s Peak, See the “Giant Fish”, A World of Pleasure, see a giant turtle, or the watch the Alligator Fight for Life and Museum. All were designed to maximize the park’s till.

You could see Margaret and Elsie, “Queens of the Deep Blue Sea.” 0r Madam Francis the “Scientific” Palmist and Astrologer. Bullfights were presented by toreadors brought up from Mexico. One could watch vaudeville theater, the A.K. Ranch, Real Wild West, Alligator Joe and his 3000 live alligators/ crocodiles or Bioplasticon (an early form of sound movies)

The racist African Dip was soon replaced with the Diana game, same as African Dip, using white women . There were bowling alleys, billiard tables, a race track game, candy wheel and even purported gambling dens. A children’s playground and a circus in the open-air Hippodrome were free attractions. Then there was the Hilarity Hall funhouse, Gumps’ Mad House.based on the popular Tribune comic strip Andy Gump, Crazy House, the mysterious palace, Fun Factory Funhouse, and a ‘Funnyland’ show . The Park Theater mixed movies with live musical comedy.

There were many female entertainers including Link’s Posing Beauties, vaudeville and musical comedy revues, Slater Brockman’s Garden Follies, Brockman’s Revue, “Chic Chic Revu.” Mlle Mercino Del Pino, the ‘sensational Spanish snake dancer’, and the Mystery Dance of Serina the barefoot Greek. There was an Open Air Revue, a chorus line of “Broadway Beauties and “The “Ballroom De Lux” as well as a ballet review .

Musical groups included Creatore, Ballman’s band, O’Hara’s Famous Orchestra, the Banda Roma, and Johnny Hand Band and Ralph O’Hara’s Clown Band. Special events on the grounds were held often including a “Prize Beef Killing Contest” where the meat was served the next day at a barbeque. There were masquerade events and dance contests, “Children’s Days,” “Sweetheart Nights”, a “Monster” Labor Day picnic and Mardi Gras from August to September attempting to imitate the event at Riverview in Chicago.

But all things would begin to fade

Prohibition and other issues dealt a severe blow to attendance. From the very beginning, the amusement park had been well connected to beer and liquor interests; A.E. Winterroth, an official of the park since 1908, was the local agent for the McAvoy Brewing Co. who had long sponsored the park’s Rathskellar, Grill Room, and Casino restaurants. Church leaders and Concordia Cemetery protested the park on a regular basis.

The park closed for the last time in September of 1922. The following April, the board of directors voted not to reopen for the 1923 season. There were many factors for closing, but prohibition was mentioned as one primary reason. Drinking beer was very popular at the park and an important source of revenue. A local newspaper article summed it up by saying that the park “gave up after a two-year diet of lemonade.”

Rides were sold to other parks. Other buildings, with some exceptions, were simply torn down. The grounds were sold for $110,000, the purchaser said to be Chicago utility magnate Samuel Insull. The stock market crash and the Insull’s downfall ended any further plans he might have had for the land. The Forest Park terminal of the Congress-O’Hare Rapid Transit line became the successor to the old Metropolitan (West Side) “L” station and serves Forest Park today as the “Blue Line”.

The Eisenhower Expressway, then called the Congress Highway, now goes right through the middle of where the park once stood. Nearby and just west of the park, 1491 bodies on 8.8 acres of south end of Concordia Cemetery had to be moved to make way for the expressway. . The project required the Cook County States Attorney to file a lawsuit against 4000 defendants, relatives and lot owners of Concordia. A 395 page judgement order was filed by the judge in June 1957 prior to the beginning of work. 125 bodies found in wooden boxes were placed in concrete vaults. A six crypt mausoleum had to be completely dismantled and rebuilt. The entire project took eight months, and was successfully completed under close court supervision. On July 30, 1960, the final segment of the Congress Expressway was opened between Des Plaines and First Avenue. At the time it became the world’s busiest six-lane expressway.

When you next take adrive on the Eisenhower Expressway, you will be driving right through the middle of what was then the Forest Park amusement park, right through what was the Shoot the Chute’s lagoon!. Roll down your car window and listen for the laughs and screams of fairgoers. Imagine the distinctive smell of cotton candy and hot popcorn.

And now, the good people buried in Concordia and Waldheim cemeteries can sleep quietly once again. May they rest in peace.