Come with me on a late night automobile ride north from downtown Chicago, 21 miles to the quiet suburb of Wheeling. Let’s choose 1924 for our trip, in a spiffy Studebaker touring car. As we drive north on Milwaukee Avenue we bypass a corridor of roadhouses, taverns, mob hangouts, hotels, arriving at 2855 Milwaukee Avenue.

We drive through a main gate and enter an extravagant resort called Villa Venice where we will have a seven course dinner, drink adult beverages, watch a Las Vegas style revue, dance until dawn, gamble and ride in authentic Italian gondolas.

But behind all the glitter and glitz is a dark side, that later in this story will end us at the beautiful Mt. Carmel Cemetery in Hillside.

In 1921, Albert Bouche (born Abram Laurin on January 13, 1881 in Celano, Arbuzzo, Italy) bought an 18 acre parcel of land on Milwaukee Avenue and the Des Plaines River in Wheeling, He rebuilt an old roadhouse originally named “The House That Jack Built.” Albert was not a newcomer to entertainment, having opened the summer Moulin Rouge Gardens at Clark and Lawrence in May 1917 and later the Moulin Rouge year-round restaurant at 416 S. Wabash.

Villa Venice was “Papa” Albert’s grandest venture in a no-man’s-land of unincorporated Cook County at an eastern bend in the Des Plaines River. During its 46 year run and in various news accounts and advertisements over the years, we glean the flavor of this elaborate place.

Readers were urged to “Mingle with Chicago’s smart set and elite”. Advertisements touted a $500,000 property, 8 acres of formal venetian gardens landscaped with 47 varieties flowers and shrubs, 50,000 blooming plants. There were walks, groves, fountains, waterfalls, statues on pedestals, high trees festooned with colored lights. There were terraces where people could dine, screened patios, an outdoor bar and much more.

There were imported Venetian gondolas drifting lazily on a man-made canal and the Des Plaines River. They were manned by singing gondoliers. Albert Bouche had to get permission from the Italian government to take the original antique Venetian gondolas out of Italy. 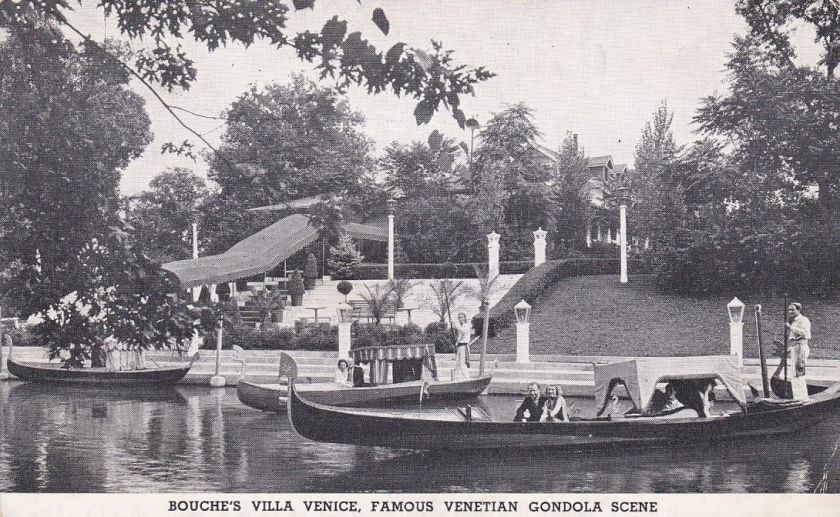 Music was provided by many orchestras over the years. You could “dance to daylight”. But the hallmark of Albert Bouche’s venue was his high energy lavish revues on stage. The showroom seated 800, and was furnished with satin ceilings, tapestries, and statuesque, lightly clothed showgirls There were three shows each night – the first at 9:30 pm, the second at 12:30 am and the third at 2:30 am. 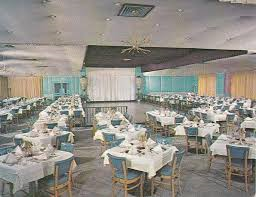 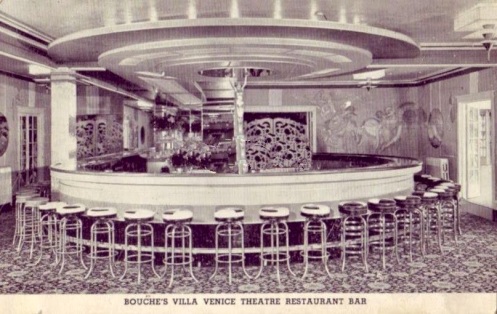 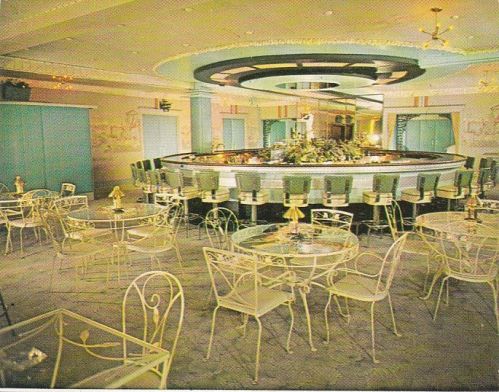 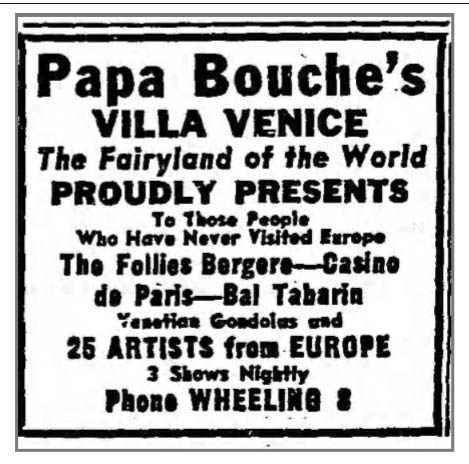 For a short while in the early 1960s, Villa Venice was owned by Chicago Mafia boss Sam Giancana regardless of whose name appeared on the Villa Venice deed. He used an alias “Mr. Flood” but made his presence felt. Giancana reportedly spent upward of $250,000 to restore the showroom, the grounds, and the canals plied by gondolas.

Entertainment continued under Mr. Giancana and featured the stars of the time. Eddie Fisher sang for a week and then between November 26 through December 2, 1962, Giancana hosted Sinatra, Martin, and Davis for a series of concerts. 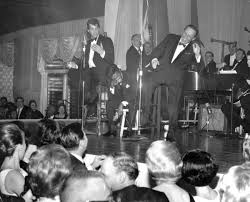 Some say the engagement was a nod to Giancana from Sinatra for his help in getting John F. Kennedy elected. It has been suggested that Sinatra asked Giancana’s to help Sinatra’s U.S. Senator friend John F. Kennedy win the West Virginia primary. In exchange, Sinatra agreed to perform at Villa Venice. Scalpers offered tickets at high prices. The performers were reportedly paid $100,000. Cars were parked for a mile in either direction. The Chicago Tribune reported: “It is now estimated that the total Villa loot for the seven-day Sinatra-Martin-Davis run will hit $275,000 to $300,000, a new night club record.

But not everything in or near Villa Venice was rosy

There were dark places and characters lurking. Born in the roaring 20’s the place was colorful, but was a bit notorious as well. There were frequent raids by law enforcement and some arrests on occasion, some going went away with payoffs. In April 1930, a bomb made of 10 sticks of dynamite was found in North Oakwoods Cemetery which authorities felt it was intended by someone for Villa Venice. A fire on June 30 1941 destroyed an entire wing, the night club, dance floor, and entertainer’s rooms. Mob weddings were lavish and well attended. Law enforcement would watch and photograph the attendees as they arrived.

One of Giancana’s major revenue sources was illicit gambling. Between shows, Villa Venice guests could take a complimentary shuttle a few blocks to the “Quonset Hut” about few blocks away, where one could gamble the night away. There were gambling tables, roulette wheels, craps and blackjack games, all crooked. Giancana and the Outfit reportedly collected an estimated $3 million from the illegal gambling and gala entertainment at the Villa Venice in the years before it finally closed down.

All good things come to an end

Albert Bouche sold Villa Venice. The end of an era was announced in the Tower Ticker column of the Chicago Daily Tribune on October 12, 1956: “Aging Papa Bouche sold his Villa Venice (in Wheeling) and poof goes Chi.’s most fantastic showplace.”

“Papa” Bouche died in August of 1964 in Miami Beach Florida at age 83. He was buried in Fred Hunter’s Hollywood Memorial Gardens East in Hollywood, Florida.

Villa Venice, insured by Lloyds of London was destroyed by a spectacular, if not mysterious, fire on March 4, 1967. Nothing of the its heyday remains. The land has become a Hilton Hotel and a fine restaurant, Allgauers on the Riverfront. 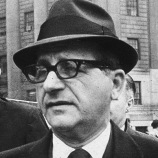 Sam Giancana (born Salvatore Giangana), the boss of the criminal Chicago Outfit from 1957 to 1966, and his operation of Villa Venice, met his untimely death on June 18, 1975. A gunman entered his Oak Park home and shot Sam in the back of the head as he was frying sausage and peppers in his basement kitchen. He was only 67.

His funeral was brief and most of the underworld were urged to stay away. After a final service in the chapel of Queen of Heaven Cemetery in Hillside, Illinois, Giancana was taken across the street to Mount Carmel Cemetery where he was interred next to his wife, Angelina, in their large family mausoleum. Mt Carmel was only some 30 minutes from the gondolas and the fairyland world of Villa Venice.times ending in a sudden murder serves as a reminder that what matters is not how much we see and do in life but the quality of our actions and what we contribute. Mae West once said: “You only live once, but if you do it right, once is enough”.

So my story begs the question: How do we define a life well lived? By what measure? It means very different things to different people, but I feel that life is incredibly fragile and is not measured by material successes, money, or stuff.

In my humble opinion, life should be all about taking advantage of every day, practicing kindness, giving back, and embracing family.  Seize each day and fill it with love and laughter. Treasure every moment and take advantage of every opportunity. Live each day like it is your last.

Feel free to add your comments