Not all people can afford a nice casket. For those without funds or family, the county would bury a body in a simple pine box. 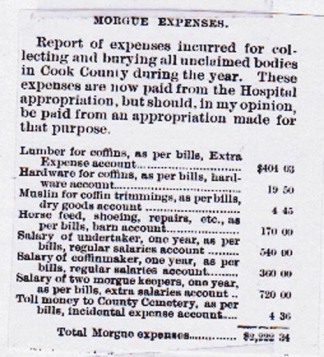 The costs were well documented back in the day. In 1885 the Cook County undertaker stated that his largest annual budget item was $404.03 for the lumber to build simple pine coffins. He spent an additional $19.50 on “nails, tacks, screws etc.” as well as $4.45 on muslin trimmings “at 10 cents per yard”. For the year ending in August of 1885, the County undertaker buried 990 souls in Cook County Cemetery at a cost calculated at only 43 cents per casket. In addition, he had a salaried coffinmaker at $360 per year ($30 per month) which resulted in a total cost to Cook County of only 79 cents per casket for materials and labor .

Read on for more about the pine casket, but also Chicago’s huge Lumber District that provided the wood, and their immense fire of 1894, second only in size to the Great Chicago Fire. END_OF_DOCUMENT_TOKEN_TO_BE_REPLACED

8,510 Chicagoans died in a matter of months despite signs placed in theatres, streetcars and elevated trains to warn against the danger of spitting, coughing, and sneezing . Undertakers and cemeteries were overwhelmed. There were orders that wake attendance be limited to 10 people at a time. Public funerals were totally prohibited for a time.

John Robertson, the Chicago Comissioner of Health warned theater managers to ensure that patrons used handkerchiefs or that he would shut down their establishments. Churches, schools, theaters, restaurants, streetcars, and other places where people congregated were ordered to maintain proper ventilation . The Illinois Influenza Advisory Commission ordered the hard closing of all nonessential places including theaters, cabarets, dance halls, skating rinks and other venues. 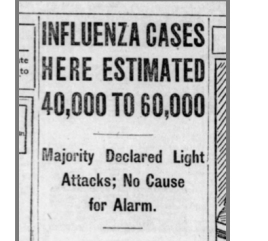 These establishments were not re-opened until they supposedly passed an inspection by the health department. Large gatherings were banned including conventions, lectures and debates, club and society meetings, union gatherings, athletic contests, lodge meetings, Billiard and bowling matches and political meetings. Banquets and weddings were postponed. Children playing in the parks were told to go home. Church services were instructed to be brief . Hotels were ordered to keep their lobbies clear of loiterers. Oddly, saloons could remain open, as could poolrooms and bowling alleys, so long as they were properly ventilated however bars were raided for disobeying the crowd-size violations set by the city. Smoking on all streetcars, elevated trains, and suburban rail lines. Businesses were asked to stagger working hours in an attempt to minimize crowds on public transportation

Despite all of these restrictions , the human toll in Chicago in 1918 was staggering. Former mayor John Hopkins and pioneer educator Ella Flagg Young were the most prominent victims. And there were the thousands of others, known only to their family and friends.

There are three theories as to where it began. One was China, another a British Army base in France, and the third Haskell County Kansas. 99% of the fatalities were under 65 and 50% were healthy young adults between 21 and 40.

On March 11, 1918, Army Pvt. Albert Gitchell at Fort Riley, Kansas reports to the camp hospital complaining of fever, sore throat, and headache. Before the day is over, over 100 soldiers fall sick. A week later, 522, cases had been reported at Fort Riley in what would be the mildest of the flu’s three waves. Forty-six died at Fort Riley that Spring .

The epidemic began locally on September 8, 1918 when several sailors reported sick at the Great Lakes training station just 32 miles north of Chicago. It became evident that the Influenza would soon spread and it certainly did. Officers instituted isolation and quarantine controls, ordered all 50,000 sailors to be given daily nose and throat, placed 1,000 men in isolation and ordered an additional 4,000 sailors under quarantine for suspect contact with the ill, and cancelled all liberty leave for enlisted sailors. And in weeks, the Flu hit Chicago hard. The most visible lasting effect are the thousands of gravestones in Chicago cemeteries. 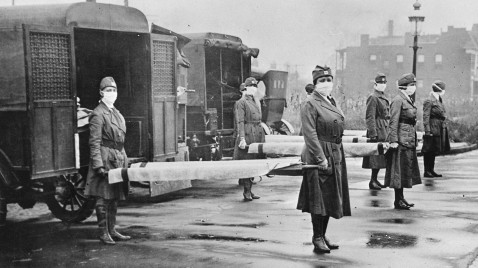