Thank you all for so much interest and response to my earlier post “New Years 1885 at 12:30PM”,  the story about the daily funeral  trains to Rosehill and Calvary Cemeteries on the Northside of Chicago.

But wait!! There’s more! There is more to share about Rosehill Station

In this very early image before 1897 or so, the original Northwestern tracks can be seen at ground level. You  are looking north. The cemetery is off left. The large train station is on the east side of the tracks, opposite the cemetery and where passengers would board trains back to Chicago.

So here is a bit more of the story and images of Rosehill Station where the Chicago and Milwaukee Railroad brought visitors to Rosehill Cemetery. More important,  the dedicated funeral trains brought both mourners and the deceased.

ituaries would state when the funeral train was to leave downtown.

(The railroad later became the Milwaukee Division of the Chicago and North western Railroad,  then since 1994, was owned by the Union Pacific Railroad, and simply referred  today as Metra North.)

In the early years, as many as 55 daily trains  left Chicago’s Wells Street Depot at Kinzie travelling northbound stopping at  Rosehill Cemetery and Calvary Cemetery, a trip of about a half hour.. The tracks were at ground level back then and the station was Chittenden Station “the first station out on the Milwaukee Railroad “ and named for the subdivision  of Chittenden.

In 1897,  as a result of concerns over the safety of residents who had to cross the tracks at Rosehill, Chicago enacted ordinances requiring the elevation of the railroad tracks.In a track elevation report for 1897, it was reported that “on March 30, 1896, an ordinance was passed elevation of the roadbed and tracks the Milwaukee and Wisconsin divisions of Chicago and Northwestern Railway Company, from Wrightwood Avenue on the Milwaukee division to Rose Hill Cemetery, a distance of about 4.5 miles, eliminating 20 grade crossings, and an estimated cost of $900,000; this work has been done.”

According to the annual report of the Chicago Department of Public Works released in 1908, they state that the Chicago and Northwestern railway company completed its track elevation on the Milwaukee division (known as the Rose Hill track elevation), from Bryn Mawr to Howard Avenues, which is the northern limits of Chicago, to the satisfaction of the city, and in accordance with the provisions of the ordinance of March 23, 1903. It was at this time that a new station was built at Rose Hill to match the stone of the cemetery entrance.

In this picture below, you are still looking north. The cemetery would be off left. But now in this picture the tracks are now elevated and a new station is on  shown on the elevated level.

In the following picture below we are now  looking south with the main entrance gate  to the cemetery on the west side of the tracks.  after the grade elevation

Here are stairs that brought many thousands down to the cemetery

One of the most unusual buildings in a Chicago area cemetery is simply an elevator. 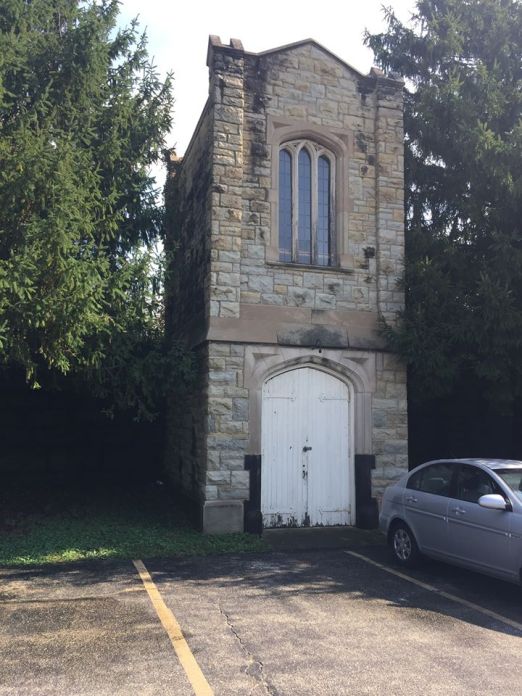 It is a beautiful structure with stained glass windows and could easily be mistaken for a small chapel.. It was built just north of the main gate to lower the heavy caskets down to ground level and then to a waiting horse and wagon for the final procession to the grave.

Funeral trains and the elevator building are no longer in use, but the “elevator in a cemetery” has survived .