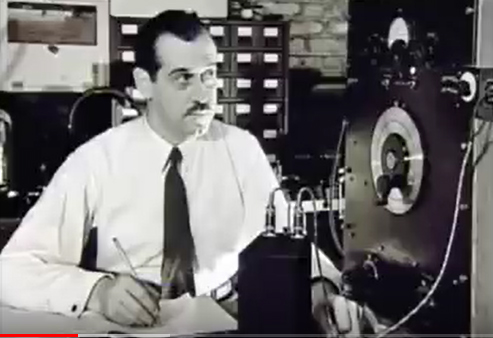 You might not recall his first few gadgets, the spring driven clock that kept better time, three-dimensional glasses,  or an automatic bridge table card shuffler.  During the World War II, he helped develop a remote control of missiles, infrared sensors to guide bombs and a new type of gyroscope.

His story gets way better so please read on!

Laurens Hammond was born in Evanston Illinois on January 11 1895, and graduated in mechanical engineering from Cornell University in 1916.. In 1925, his Hammond Clock Company began on the second floor at 616 Davis in Evanston. 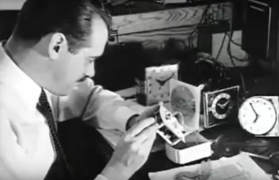 There, he designed a synchronous clock motor, which rotated at a speed tied to the frequency of the current supplied by electricity. His clocks sold well, but by 1932, over one hundred other clock companies had gone out of business due to the Great Depression. Hammond needed to create something new.

The Hammond Electric Bridge Table was an automatic card shuffling machine built into a card table which using electricity dealt playing cards at random to four bridge players. It was patented on November 29, 1932. Around 14,000 tables were made and but only a few thousand sold.

The table was so popular during the Christmas season of 1932 that Marshall Field’s had taxicabs waiting at the factory to pick up lots of four or five tables and deliver them immediately to the store for their pre-Christmas sales. The electric bridge table was featured at the 1933 World’s Fair in Chicago.  The price was $25 with a deluxe model for $40,  but because of the Great Depression sales soon declined.

Continuing his work at his clock company,  he created a tonewheel or “phonic wheel” by listening to the moving gears of his electric clocks and the tones produced by them. And then, although not a musician, He gathered pieces from a second-hand piano he had purchased for $15 and combined it with a tonewheel generator. 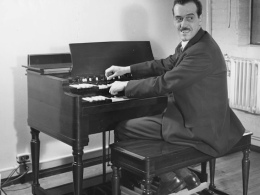 On April 24, 1934 his patent for an “electrical musical instrument” which became the famous Hammond Organ a less expensive alternative to a traditional pipe organ.  . It could imitate the sound of almost any instrument, but nothing else could imitate the “classic” Hammond sound. The Hammond was and is used in all types of music, from Gospel, to Blues, to Jazz, to Funk, to Rock. Professional jazz musicians in organ trios were hired by jazz club owners, an alternative to hiring a big band.

The first Model A was unveiled to the public in April 1935.  Over 1750 churches purchased a Hammond organ in the first three years, and by the end of the 1930s, over 200 organs were being made each month.  The Hammond Organ Company produced an estimated two million organs in its lifetime; By 1966, an estimated 50,000 churches had installed a Hammond.

The most popular model was the B3,  produced from 1954 to 1974.  It had two 61-key manuals, a 25-key pedalboard, an expression pedal, 12 reverse-color preset keys, two sets of drawbars for each manual, and one for the pedals.

It could sound like a carnival, a big band, a horn section, a small jazz combo, percussion, flutes, and more.  The answer begins in the drawbars. Early on, Gospel churches embraced the B3. the Hammond B-3 was immensely popular during the 50’s and  and even into the seventies when the first portable synthesizers began to appear.

In 1975, the last classic B-3 left the assembly line. About 270,000 were built. However, times were changing. Moog and Arp synthesizers were the rage of the day. 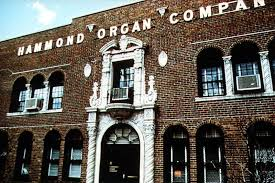 Hammond had several locations in the Chicago area,  the first at 2915 North Western Avenue where the prototype Hammond Organ was built in 1933. then 4200 West Diversey in 1949.  The Hammond Organ Company struggled financially during the 1970s, and went out of business in 1989. The name was purchased by the Suzuki Musical Instrument Corporation, and rebranded the company as Hammond-Suzuki

He died July 1, 1973 in Cornwall, CT, the home of his wife Roxana Scoville Hammond. His remains were cremated in Pittsfield, Mass, July 6, 1973. Other family members are interred in the Hammond family plot in Chicago’s Graceland cemetery. This includes: Rev. Henry Laurens Hammond (his grandfather) 1815-1893, Eunice Bingham Hammond (his grandmother), William Andrew Hammond (his father), and Idea Louise Strong Hammond (his mother).

Thank you Laurens for all what you gave us!

One thought on “Lauren’s Gimmicks”