On a cold but sunny day in January 1885,  I take you to Wells and Kinzie streets in Chicago, the then Wells Street depot of the Chicago & Northwestern Railroad. The station was sometime referred to as the Kinzie Depot. It was bounded by the Chicago River to the south and west, Kinzie Street to the north and Wells Street to the east.  The station is long gone, replaced by the Chicago and Northwestern Station (Ogilvie Transportation Center)   The Wells Street Station site is now the massive Merchandise Mart built in 1930. 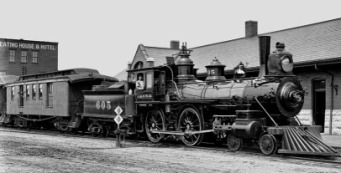 Train number 31  was just one of fifty-five daily Northwestern trains.  What made this train different is that it is the daily Northwestern funeral train taking mourners and the deceased to Rosehill or Calvary Cemetery. The train leaves Chicago every day at 12:30 PM sharp, including Sunday north bound for the two cemeteries.

There are two different fare tickets. One regular fare for those mourning next of kin passengers riding in the forward cars and a special “corpse ticket” for the deceased person in the baggage car taking his final ride. The family member or undertaker in charge of the body purchases the corpse ticket for about double a regular fare, then tenders it to the conductor. On any particular day the baggage car can contain any number of coffins, as few as one or two, sometimes six, and often filling the entire car. For funerals with a large number of mourners, an entire coach car can be chartered for $15 and then no tickets are required of the mourners. Additional cars are $12 each. The charter then also includes passage for the deceased.

The funeral train usually consists of three coaches, a baggage car, and the engine. There can be a second train added to the daily schedule when necessary.

Leaving Wells Street right on time, train #31 arrives at Rosehill Cemetery at 1 PM where mourners and the deceased detrain at the Rosehill Station. Pallbearers unload the casket from the train and take it to a waiting horse and wagon for the trip to the gravesite.

Then the funeral train proceeds to Calvary Cemetery in South Evanston a bit later.  It continues, mostly empty on to Highland Park arriving at 1:55 where it is turned around for it’s return trip. At 3:06 PM it picks up the mourners who have finished burying their loved one at Calvary Cemetery Evanston. It does the same again at Rosehill Cemetery at 3:15 PM arriving back in downtown Chicago at 3:45 PM.

The funeral train was originally operated as early as 1859 by the Chicago and Milwaukee Railroad in cooperation with Rosehill Cemetery. In the early years the tracks were at grade level and special trains were run just for the convenience of cemetery visitors. They were scheduled to not interfere with “regular business”.  For instance, a train in December 1859 left Chicago on Wednesday and Saturday at 3pm, arriving the cemetery at 3:15pm, then leaving Rosehill at 4:45 PM allowing for a very brief visit at the relatives gravesite.

These trains arrived at Rosehill Cemetery at what was first called Chittenden Station, named for the “town” of Chittenden, where most of the land was later sold to the Rose Hill Cemetery Company. We know this from the following item that appeared in the September 16, 1857, issue of the Chicago Tribune: “Today one hundred and fifty lots are to be sold in the town of Chittenden, at Auction… Chittenden is the first station out on the Milwaukee Railroad, four miles from the city and presents many inducements to those desiring a residence near, but not in the city.” Sometime after Rosehill cemetery opened, the name of the stop was changed to Rose Hill or Rosehill (the use was not always consistent.)  Later, the trains evolved into regularly scheduled funeral trains to accommodate family, and friends and the deceased.

Sometime in the 1890s as a result of concerns over the safety of residents who had to cross the tracks, Chicago enacted ordinances requiring the elevation of the railroad tracks, but it wasn’t until 1908/1909 that the line was elevated all the way into Evanston. It was at this time that a new station was built at Rose Hill to match the stone of the cemetery entrance. The 1869 schedules shows 10 week-day trains between Rose Hill and Chicago, and 14 between Chicago and Evanston). But the frequency increased. 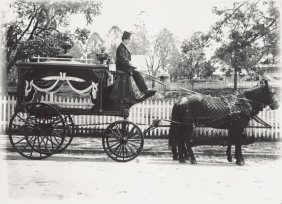 Back in the day, the alternative to reaching the cemeteries other than by train was grim indeed. A horse driven hearse and/or family carriages had to follow Clark Street or “Rosehill and Evanston Gravel Road” (possibly a reference to what is now Ravenswood Ave). Another route was to Bowmanville via the “Prairie Road” (later more commonly known as Little Fort Road and now Lincoln Avenue) running northwest beginning from Wells Street near Clark. And still a fourth route was via the Lakeview Plank Road from Fullerton Ave (2400 north) , the present North Broadway Avenue. All four routes back in the day could be difficult or even impassable due to weather.

Funeral trains were slowly made obsolete, replaced by the motorized hearse and better roads. As funeral homes opened on the northside of Chicago, the trip to the cemetery was shorter than going to the downtown railroad station.

A BONUS SIDE NOTE: CEMETERY SALOONS

Not every funeral of the day used the funeral train service. Many still relied on the horse driven hearse and a cortege of carriages. In an 1890 article of the Chicago Tribune, we find a headline that reads “Saloons in close proximity to the cemeteries – North Clark street lined on one side with graves and the other with Roadhouses”. The article speaks of Clark Street as “Funeral Avenue” and was described  as an “endless succession of saloons”. The finest and largest was opened at Ridge and Clark by Mr O”Hern. There was sheds for over 100 carriages.

Another 15 or 20 other saloons along Clark Street could each accommodate more than 50 carriages Some were close to the Rosehill gate but none were next to Calvary because Evanston was officially dry. Those thirsty mourners need only cross the city limits into Chicago. There was a convenient and well placed watering trough for the horses in front of these establishments. The driver would stop and the bartender invites everyone inside for a drink. The driver would often be given free whiskey for his cooperation.