The Chicago Tribune of August 8, 1897 describes “Indian Braves under the pavements of LaSalle Street and neighboring thoroughfares.”

So, we were not the first here in Chicago to live and die. The Potawatomi’s were here long before us,  living in villages along Lake Michigan, and Chicago’s rivers. They buried their dead close to or adjacent to their villages, along the branches of the Chicago River and along the Des Plaines River banks. The Potawatomi were forced out of the area under the 1833 treaty. Therefore, we might assume that most all  Native American burials in the Chicago area occurred before 1833. There is not a complete record of these burials, but I will share here what I have found in records. We start in the downtown area.

Fort Dearborn began as a wooden stockade built in 1803 on the south bank of the Chicago, at the intersection of modern-day Michigan Avenue and Wacker Drive.

The fort was the U.S. Army’s westernmost outpost in the early 19th century Potawatomi Native Americans burned the fort down, but it was rebuilt in 1816 on the same site.

There is historical evidence of Native American burials just inside the gate of the fort, (north of the gate on the east side of the path leading to the garrison.) It was north of the soldier’s garden. Little is known about this cemetery, but the following narrative gives us some help: It can be found on the 1808 Fort Dearborn map as an Indian cemetery

An article is quoted here: “There was an old Indian Burial Ground adjacent to that of the Garrison. A number of Indian skeletons were exhumed in excavating the cellar for a house on Michigan Avenue (100 east). One of them was a chief, and was profusely accompanied with metal ornaments and other articles prized by the Indians. On the west side of the fort were barns, stables, root house, and cellars.”

This cemetery should not be confused with the Fort Cemetery (also known as Common Burial Ground at Fort Dearborn, or Garrison Cemetery) located outside the gate and a little bit farther down (south) the path.

References include:  Summary of Information on the Site of Fort Dearborn dated March 1971      (pamphlet collection at the Chicago Historical Society) and a  Map – prepared by Harry A Musham from the report by Captain Whistler.    (Printed in the Chicago Tribune on December 29, 1949.

Then we have a mention of Rush Street

Native American burials were described as being “near the foot of Rush Street.” The Chicago Tribune for Sunday, August 8, 1897 reported that traces of an Indian burial ground were discovered during the Summer of 1896.  Not much more is known.

First, we read of a mound once near  the “St Paul Railway Viaduct at Ridge Avenue”

This location was described as being “at the intersection of the Saint Paul (Railway) viaduct and Ridge Avenue”  in Evanston. According to the reference, an Indian mound was discovered and excavated, about 1860, by Evanston pioneers, Joel Stebbins, Paul Pratt, and James Colvin. Skeletons and war instruments were found.

Reference: Reeling, Viola Crouch, Evanston, Its Land and its People, Fort Dearborn Chapter, Daughters of the American Revolution 1928, Page 63. The book is described as being a “narrative” of Evanston history, “carried only to the year 1900”. 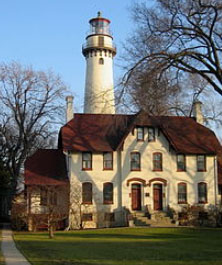 Then we find reference to the  West side of Ridge, north  of  Sheridan, 4‑5 blocks north of Evanston Lighthouse (now at 2601 Sheridan Road in New Trier Township

This Indian cemetery is described as being “On the west side of Ridge Avenue, a little north of the intersection of Sheridan Road, thirty to forty feet south of where Joseph Nellessen once lived, some four or five blocks north of the Evanston lighthouse. The cemetery extended north from Evanston Hospital to the lake, terminating about where  P.W. Gates once had his home and extending across the eastern edge of the Evanston Golf Grounds.”   This lengthy location is taken from “History of Evanston

On today’s map, the cemetery would have been in New Trier Township, northwest of the intersection of Ridge and Sheridan (Isabella) possibly in the vicinity of Bahai Temple and National Lewis University. This location is mentioned again in  Evanston, its Land and its People by Viola Crouch Reeling with the Fort Dearborn Chapter, Daughters of the American Revolution 1928, Page 63. The book is described as being a “narrative” of Evanston history, “carried only to the year 1900.” This reference mentions the location as being ” four or five blocks northwest” of the Evanston lighthouse rather than “north”, and “extending from Evanston Hospital to the lake, and along the eastern edge of (the) Evanston golf grounds”.

A description of one burial as described in the Reeling reference is as follows:

“The last “burial” in this cemetery was evidently that of a warrior, as the body was placed in a sitting position above ground. According to Charlevoix, “burying in a sitting position is an honor due alone to warriors.” The coffin or resting place was like a little pen, six feet long by four feet wide, and was made of poles or saplings laid up like a log house and bound together at the corners with withes of bark. The top was also fastened in a like manner. The skeleton, sitting upright above ground, was facing east. With him were his dog, gun, pipe, tobacco, and tomahawk. The tomahawk, which has a steel head and wood handle, and probably was of French manufacture, may be seen at the Evanston Historical department, as it was presented to the Historical Society by. B.F. Hill, who with his two older brothers saw this grave, and twelve or fifteen years later procured the instrument. These small boys, after viewing the grinning skeleton through the spaces between the poles, fled terror stricken to their home. The exact site of this burial place was less than fifty feet from the ninth hole or green of the former Evanston Golf Club’s course” . (The golf club since was  relocated to 4401 Dempster in Skokie.)

The Reeling reference states that James H. Hammill an “Indianologist” from Oak Park discovered a number of Indian relics had been ploughed up and discovered in 1921. It was determined that this site had been an Indian Village and burying ground. The Fort Dearborn Chapter, Daughters of the American Revolution placed a boulder and bronze tablet on the Evanston Hospital grounds in 1923. 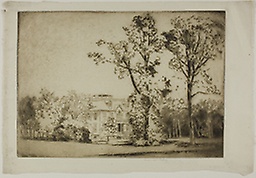 Then next there is a a fragment of a mention,  “Two blocks north of home of Charles Deering”

The Classic Town, A History of Evanston, mentions two Indian graves were found about a block north of the home of Charles Deering. The present day address for his home is 1937 N Sheridan Road.

Still next, under Heck Hall – on the campus of Northwestern University

The Classic Town, A History of Evanston, mentions two Indian graves discovered in 1886 while laying the foundation for Heck Hall, the first building constructed on the Northwestern University campus.  This location is mentioned again in  Evanston, Its Land and its People, Viola Crouch Reeling, Fort Dearborn Chapter, Daughters of the American Revolution 1928, Page 63. The book is described as being a “narrative” of Evanston history, “carried only to the year 1900.” This reference mentions that “an Indian cemetery, located north of the institute..” (Northwestern University), “..was washed away in 1862.” 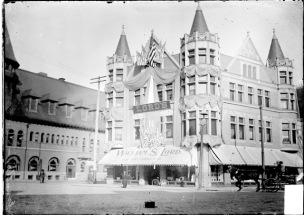 Another Native American grave, found at  the site of the James Rood building on Davis Street,  Evanston Township

The Classic Town, A History of Evanston, mentions one grave found during the excavation for the foundation of a building for James Rood. It was stated that the event occurred some ten years before the publication of the book.

This location is mentioned again in  Evanston, Its Land and Its People, Viola Crouch Reeling; Fort Dearborn Chapter, Daughters of the American Revolution 1928, Page 63. The book is described as being a “narrative” of Evanston history, “carried only to the year 1900.” This reference mentions the skeleton was found in the 1890’s, and that the Rood building was on Davis Street.

The Classic Town, A History of Evanston, mentions an Indian grave found on the property of Dr. Robert D. Sheppard , (225 Greenwood, later the Charles G. Dawes House in Evanston.)

astly, in Evanston The Classic Town, A History of Evanston, mentions an emblematic or totemic mound in the form of a huge lizard existed under the site of the Wellington Street station of the Northwestern Railroad.