For those who have read my blog  “THE EXPLODING ACCORDION” at https://chicagoandcookcountycemeteries.com/2018/12/05/the-exploding-accordion/ this is somewhat of a humorous sequel. The Exploding Accordion was the story of my Uncle Jack Erschen, (stage name Jack Rich) who carved out a ten year career on vaudeville stages across the country. Later, in life he became a professional Hammond organist in Illinois clubs and restaurants. Even if you have not yet read his story, read on…

Jack was also in love with the mighty Wurlitzer theatre pipe organ and on occasion played on them in years ago, but they never became a major part of his musical career. In his honor I built an odd tribute to him by designing and constructing a miniature room display. It is both a tribute and a spoof at the same time. This miniature room box was a fun project to build and later exhibit at a miniature show. 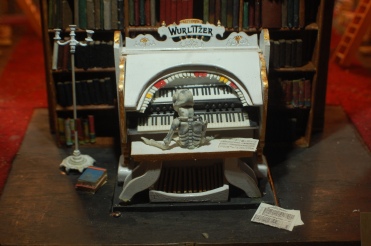 This room box is a odd combination of fact, lots of fiction, and fantasy. In my very fictional story, it was a dark and stormy night when an old retired vaudeville organist sadly passed away while playing Toccata in D minor at the keyboard of his beloved mighty Wurlitzer. He had previously installed the organ in the library of a decaying mansion where he intended to live out his last years. The pipe organ was salvaged from an old movie theater. Sadly, time had passed him by. There was no more applause, no more curtain calls. Vaudeville was over and he was alone with only some money, declining health, and his memories. His favorite room was the library with hundreds of books and piles of sheet music. He loved “gimmicks” so he built an elevator lift that would raise and lower the organ just as in the old movie theatres that he once played at for so many years ago. 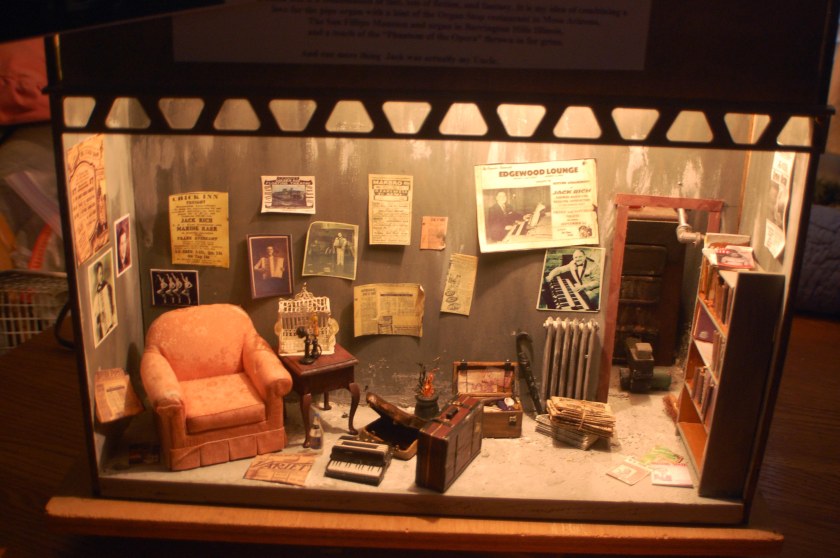 Below the musty library was his “catacomb”, a  dark dank basement where the old organist might have sat and slept, where he could retreat from the world and reflect quietly on the heyday of his career. Sparsely furnished, the basement showcases his earlier years.

There is a suitcase from his endless vaudeville travels, a well worn accordion, and no end of old newspaper clippings and photographs. Here on this lower level, I have actually placed reminders of my own uncle on the wall.

All of this was of course make-believe. This was just my fun way of connecting my love of building miniatures, the lore of the pipe organ and my uncle’s vaudeville past. In real life, Jack Erschen never died at the keyboard nor lived in a mansion, but  lived in a rather normal house that he built himself in Wooddale Illinois.

I miss him  as I do the  stories of live entertainment in those glorious old theaters like the Orpheum, the Paramount and the Fox.  The good news is that a number of mighty Wurlitzer pipe organs still survive. If you have the opportunity to hear one, you will be well rewarded!