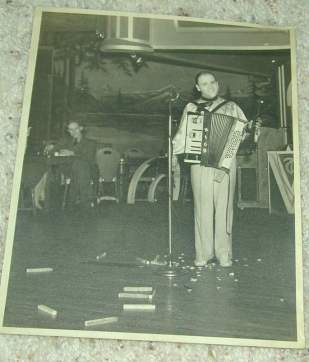 The year is 1932. Jack Erschen, (stage name “Jack Rich”)  was making his mark on the vaudeville stage with his silly invention,  a tricked out accordion, his “gimmick” as he would say.  It would play only a few notes before he would hit a secret button,  causing it to fly apart all over the stage, accordion keys and parts everywhere, sending loads of candy into the delighted audience!

The word “vaudeville” is said to have been derives from “voix de ville,” or “voice of the city.” Or possibly the French vau-de-vire, referring to the Valley of the Vire in Normandy, where itinerant singers amused the crowds . Vaudeville theaters in America featured musicians, singers, dancers, comedians, animal acts, magicians, ventriloquists, strongmen, impersonators, acrobats, jugglers, one-act plays and more!

If you had the right stuff, you picked up the dance steps, the vocal style, the comic timing that could make you a star. In 1919  vaudeville was truly an important industry in Chicago. the sidewalks on the corners of N. Dearborn and W. Randolph Sts. were crowded daily with vaudeville performers seeking work at a number of the vaudeville booking agencies

John William “Peanuts” Bohn became  a popular Chicago vaudeville entertainer, performing and emceeing at the Rialto Theater, under the stage name “Peanuts.” He was a comedian, playing clarinet, flute, and  harmonica. He whistled and sang, with a group called The Four Buddies. He died in 1954 and is buried in Rosehill Cemetery, Chicago.

Margaret McWade was born 3 Sep 1872 and began her entertainment career in vaudeville, appearing in a comedy act billed as the “Pixilated Sisters”. She eventually acted in 104 films. She died in 1956 and was buried in Rosehill Cemetery, Chicago.

pearing live city to city in circuits. The Keith, Schubert, and Loew theatre chains dominated the East while the Radio, Pantages and Orpheum chains dominated the West. They owned and controlled the series of vaudeville theatres and motion picture theatres. In 1928 Orpheum merged with the chain of 700 theatres owned by Benjamin Franklin Keith and Edward Franklin Albee II to form Keith-Albee-Orpheum. In a few months it became the major motion picture studio Radio-Keith-Orpheum (RKO).

John Peter “Jack” Erschen was born  in Chicago on October 26, 1909 to Nicholas Erschen and Augusta Reich. He came to vaudeville much too late to make the big time. He worked the RKO and Orpheum Circuit as a self taught musician, actor, comedian, dancer, and master of ceremonies. He was best known for his skill in playing the accordion, or “squeeze box” as it was often called.

Headliner Sophie Tucker noted that by 1931 “the movies had a death grip on vaudeville,” America plunged into the Great Depression and Vaudeville’s virtual disappearance by World War II. Vaudeville circuits evaporated as vaudeville theatres became movie palaces. Radio became a new form of entertainment. Although many theatres still presented acts between films, the number of available gigs kept shrinking. This took a brutal toll on thousands of performers. It was a hard life. Out of some 20,000 performers across America, less than 2 percent would make a good living out of vaudeville. Fewer still would enjoy celebrity.

Despite the changing scene, Jack managed to carve a career of over 40 years,  beginning in those waning days of vaudeville . It all started when his mother Augusta (“Gussie”) entered her five year old  “Johnny” into a talent contest at a Chicago west side neighborhood  theatre, planting the seed of show business.  As a teenager, circa 1925,  he was worked as a Western Union messenger out of Chicago’s Wrigley Building.

While delivering a telegram, he met Al Carney, the staff organist for Radio Station WHT (named for Mayor William Hale Thompson who had owned it)  with a studio in the Wrigley Building. Al encouraged and mentored Jack into the world of music and was known to have said to Jack,  “Sit down kid, I’ll show you”

Jack was self taught with no real formal training,

watching vaudeville and stage shows in downtown Chicago and listening to the radio. He began his career in 1929, and during the toughest and last years of vaudeville, went on the road until 1939. He practiced his music and sought out opportunities to play in public. He left home for Pittsburgh. 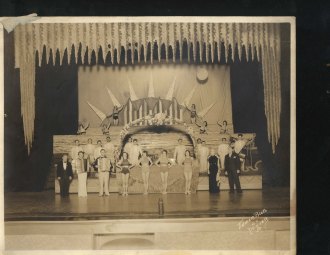 One of his first stage appearances was  September 18, 1929 at the West End theatre in Pittsburgh.  In  the revue  “Broadway Flashes” he was the “Boy Wonder, accordion wizard” with the Happy Four Quartet. He would grind out a living wherever he could, like the Rialto Theatre in Beaver Falls Pennsylvania. Critics wrote “The show opens with Jack Erschen who entertains on the piano accordion. Acts of this class have frequently appeared but Jack puts his numbers over in a way that delighted the audience”

In August of 1930, Jack, only 20,  was hired by Captain Bill Menke who owned the Goldenrod Showboat. claimed to be the last t built for the Mississippi River. Jack Rich was described as, “ One of the new faces is that of a boop-a-doop accordion player who comes close to stealing the show with his vaudeville specialty between the acts of the drama, “The Maid and the Man”.

He was just beginning, young, and eager, and had had no idea what was in store for an average vaudeville performer of the day.  It was a tough life. The poor pay and the pressures of being on the road took its toll, as did the stress of doing several performances a day. The turnover rate among performers was as high as 70% a year.

In  1930, just after his 21st birthday he played The Harris Theatre of Findlay Ohio, “Vaudeville – Five big Acts”.   Then came the beautiful Granada Theater on Sheridan Road , the Senate Theatre and the Marbro  Theater all in Chicago. Next was Fort Wayne, then Detroit’s crown jewel, the Fox Theatre  in  Tommy Sacco’s “Ballyhoo Review”, and  Appleton Wisconsin’s Fox Theatre where admission was 35 cents during the day and 40 cents at night. His trademark became “Accordionly Yours”

In 1932 he appeared on the National Barn Dance WLS Chicago NBC  One of the most popular and longest running programs on  radio . There was the Tivoli Theatre in Windsor Ontario where he was billed as the  “ Padederewski of the Accordian”.

Small dates followed in Indiana ,  Ohio, and Michigan. At a night club in Grand Rapids who advertised “ The only nite club in Grand Rapids bringing New York and Chicago talent to you – Dine and Dance”  Jack Rich was billed as an “ Unusual Musical Surprise novelty” 2 shows nightly 10:30pm and 12AM, Tueday Matinee 2:30pm til 5pm 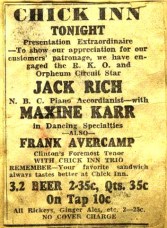 Filling in dates between theatres,  he played the Schlitz Nite Club in Battle Creek MI  and the ENB Club in Akron. Just after the Strand Theater in  Cincinnati, he teamed up with Mickey Karr. They began in Aberdeen SD at the New Bijou  Theatre with their  Jack & Mickey Karr “Steps and Chords” . They continued west to Vancouver British Columbia’s  Majestic Theatre, then the Paramount Theatre in Portland, the Majestic in Corvallis, The Los Angeles Orpheum Theatre (the last of four Orpheum Theatres in LA), the Tabor Theatre Denver Colorado. He returned to the Midwest in 1935 with dates at the famous Castle Farm, near Cincinnati Ohio, then Zanesville and Lima. Contracts often came by telegram.

His career on the road ended when he met a dancer Ann Gargash. They built a house in Wooddale Illinois, and both worked at Schwinn Bicycle plant in Chicago by day.

He became an accomplished Hammond organist, in Chicago suburban lounges and supper clubs at night for many years. He performed at the Edgewood in  Addison Illinois and the Terrace restaurant’s Emerald in Elmhurst. . Jack and Ann were married 53 years .

Jack Erschen/Jack Rich was my uncle, my hero, and my mentor. He died in 1992 and his soul resides with his parents at Rosehill Cemetery, Chicago. A part of vaudeville died with him.

5 thoughts on “The Exploding Accordion”