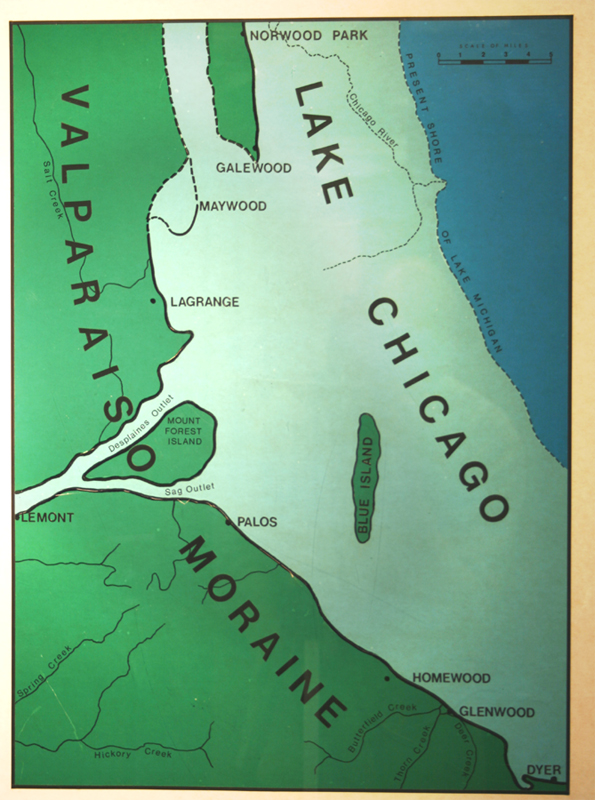 To most of us, Chicago seems quite flat and for good reason.  Most of the city was once a giant lake bottom, a product of glaciation..  Glacial Lake Chicago was at its maximum about 12,500 years ago when it covered what is now the entire city of Chicago. 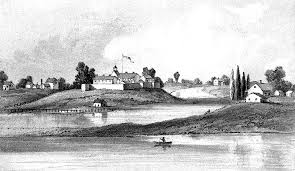 As a result, early cemeteries in low lakefront sand fared poorly.. Back in the 1800’s we buried our relatives where they lived, along the then lakefront and Chicago River, with mixed results.

The Tribune of 1897 state “..that all along both sides and partly under its present bed, from Market Street to Dearborn or State, bodies of early Chicagoans are thickly laid.” The Daily Democrat reported “Two coffins seen floating down the river (were) supposed to have been from some burying ground on the North Branch of the Wabansia Division.”

We soon realized newer cemeteries would do much better on higher ground. As an example, the many cemeteries along Clark street took advantage of the fact that Clark follows along an ancient geological feature named the “Graceland Spit”. Likewise, Rosehill Cemetery (AKA Roe’s Hill) sits on the “Rosehill Spit”. 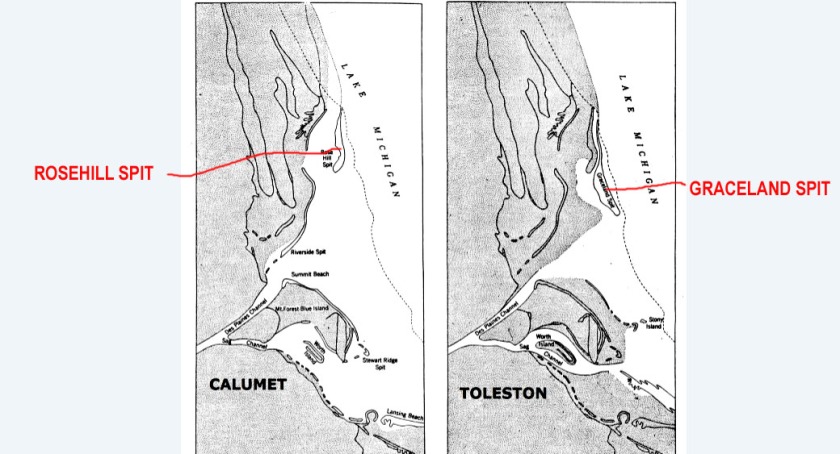 But wait, there’s more! Almost all the cemeteries farther west in the city and suburbs were built on spits, islands,and  moraines,  once the western shore of Lake Chicago. There is a reason for names like Blue Island, Ridgeland, Mount Forest, and Ridge Road. They all can be related to our “higher Ground” cemeteries.

The location of our first Chicago cemeteries were geological disasters because they were on the shifting, sand of the lakeshore or along the banks of the Chicago River.

The Tribune of 1897 state “..that all along both sides and partly under its present bed, from Market Street to Dearborn or State, bodies of early Chicagoans are thickly laid.” The Daily Democrat reported “Two coffins seen floating down the river (were) supposed to have been from some burying ground on the North Branch of the Wabansia Division.”

The Chicago Tribune of 1897 described the  North  Side Cemetery 1835-1847 (also known as Chicago Avenue Cemetery)  “.. as a “most dismal place. There was nothing but sand and sand. After a windstorm, the bleak shore looked positively grewsome. The sands would be piled in little piles on some graves, while at the low places the coffins, sometime half showing their contents, would be exposed.

The reviews of City Cemetery in Lincoln park,  the successor to North Side Cemetery, were equally grim. .  The area east of the cemetery was described as being not much more than a “wide beach of sand, the shore line shifting with every storm.”  Accounts state that “ridges of sand held moisture to support some vegetation and much poison ivy grew in this area. There were occasional clumps of willows and scrub oaks, but was a desolate piece of land.”

The potters field section of City Cemetery was described as  being on “the very lowest of land, and on the immediate borders of the slough, where the lake water constantly ebb and flows”  Souls buried there  at a cost of 1.50 each received little value.

Many of the Chicago area’s trails and roads follow some of the ancient beach lines, moraines, ridges or sand spits. So, as new cemeteries were established in the Chicago area, most sought higher ground taking advantage of this geology.

Graceland Spit,  a sandy finger of high ground surrounded on all sides by Lake Chicago,  was named after Graceland cemetery. Clark Street runs along it’s crest and at one time the spit extended 12 miles long and 1.5 miles wide 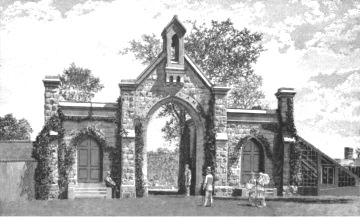 The Rosehill Spit is also a high ridge of sand and glacial rock,  left in place by the receding Lake Chicago, which preceded the current Lake Michigan. It continued north of Devon Avenue following Ridge Avenue and through Evanston. Prior to the incorporation of Rosehill Cemetery in 1859, some of the land on this spit was known as Roe’s Hill. The Rosehill Spit is a cousin to the Wilmette Spit farther north. 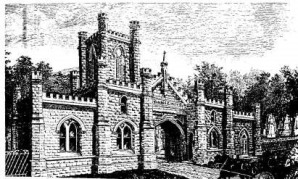 Green Bay Road in Glencoe follows the crest of the Highland Park moraine. The Deerfield moraine (Waukegan Road) separates the east and west forks of the North Branch of the Chicago River.

On the western shore of what once was Lake Chicago, we find a prominent ridge under or near Ridgeland Avenue in Oak Park, Narragansett Avenue,  Grosse Point Road and Carpenter Road. Mt Mayriv Cemetery, Mt. Olive Cemetery, Union Ridge Cemetery,  Cook County Cemetery at Dunning  and St Adalberts Catholic Cemetery all took advantage of this relatively  high ground as well as the Park Ridge moraine which crossed Milwaukee Avenue and Northwest Highway on into Niles and Park Ridge. 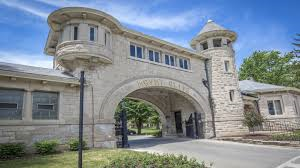 The Oak Park Spit ran southwest toward the Des Plaines River from Chicago’s Galewood neighborhood to Roosevelt Road.  It became a path for travelers, site of Native American villages and burial grounds, as well as high ground for Forest Home, German Waldheim, and Concordia cemeteries.

The Blue Island morainic ridge was once surrounded by the waters of glacial Lake Chicago. It is 7 miles west of Lake Michigan,  extending from the Dan Ryan Woods (87th and Western) nearly six miles south to the Calumet Sag Channel in Blue Island. It is 672 above sea level and  91 feet above lake Michigan . Cemeteries in this area include Beverly Cemetery, 12000 S. Kedzie Avenue at 120th Street,  Blue Island Cemetery 127th (Burr Oak) and Highland,  Lincoln Cemetery and Oak Hill Cemetery at 11900 Kedzie Avenue and others. Four cemeteries located on Worth Island, and three other cemeteries are on Mt Forest island.

So, the moral of the story is that high ground is ideal for cemeteries,  well remembering the terms “high and dry” and “always take the high ground”. Thanks for reading!

4 thoughts on “Why are Cemeteries where they are?”