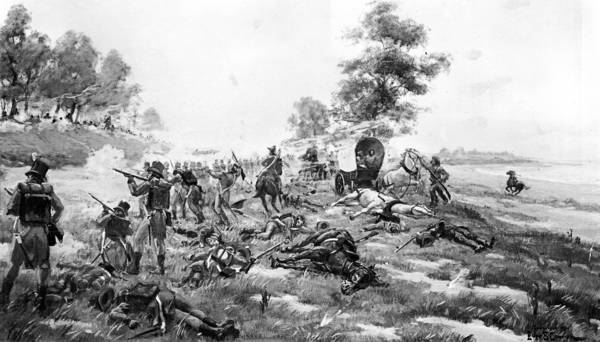 Once located in the sand hills of the lake shore, between 16th and 18th,streets, centered  about east of 1729 S Prairie or the Northeast corner of 18th street and Prairie Avenue. Chicago, Cook County, Illinois 60605

This is one of the first early white burial sites in Chicago whose bodies were later reburied at the Fort Dearborn Cemetery.  Historical accounts state that on August 15, 1812, 39 men, 2 women, and 12 children led by Captain William Wells and John Kinzie started out south along the beach from Fort Dearborn for Fort Wayne when a surprise Indian attack took place. Their bones lay in the sand, half buried where they were killed, until 1816 when Fort Dearborn was reopened. They were then reburied at the Common Burial Ground at Fort Dearborn, also referred to as Fort Cemetery or Garrison Cemetery.

As is common with very early burying grounds, the exact location is sometimes hard to pinpoint and accounts differ.   The Chicago Tribune published “In 18th street, near Fernando Jones house (1834 South Prairie), is a spot supposed to contain the bodies of some two score dead, while for several blocks along the lake shore, it is said, graves were scraped into the land.”

The Chicago Tribune article of  October 7, 1900 describes the location as follows:  “Mrs George W. Pullman’s house (1729 South Prairie) stands about where the massacre took place and where victims were buried.”  Another source states that “the site was just behind the Pullman mansion”. The three story mansion built in 1873 was valued at $500,000 in 1880, but was demolished in 1922.

Another report suggests that the massacre burials were: “what would now be 18th street and Calumet Avenue (325 east)” Still another source states that “The massacre was centered just east of what is now Prairie Avenue between 16th and 17th.

Still another source states that hey were left half buried near what would now be 18th street and Calumet Avenue on Chicago’s near south side. Andreas describes the site as being  “in 18th Street, between Prairie (300 east) and Lake Michigan.” 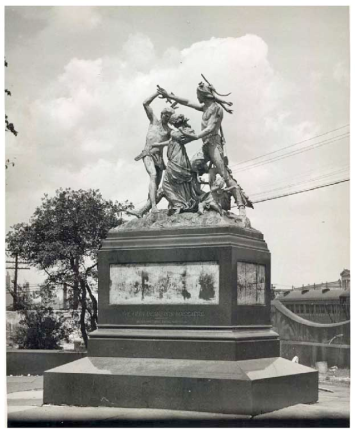 The site was marked by for over a century by a large cottonwood tree.  After the tree died, it as replaced by a bronze statue “Black Partridge Saving Mrs. Helm.” commissioned by George Pullman in 1893 at a cost of $30,000 created  by the artist Carl Rohl-Smith (1848-1900). Pullman wrote “”an enduring monument, which should serve not only to perpetuate and honor the memory of the brave man and women and innocent children — the pioneer settlers who suffered here — but should also stimulate a desire among us and those who are to come after us to know more of the struggles and sacrifices of those who laid the foundation of the greatness of this city.”

The monument was, to the dismay of many, was removed in 1931. It has been written that it has last been seen in a City of Chicago garage below the overpass near Roosevelt Road and Wells Street.

On Saturday August 15, 2009, the Chicago Park District dedicated the site as a park, and in a some misguided attempt to be politically correct, somewhat sanitizing history, they renamed the event from “massacre” to “battle” naming it the “Battle of Fort Dearborn Park” for the “Site of Battle of Fort Dearborn”

From roughly 1620 to 1820 the territory of the Potawatomi extended from what is now Green Bay, Wisconsin, to Detroit, Michigan and included the Chicago area. In 1803, the United States Government built Fort Dearborn at what is today Michigan Avenue and Wacker Drive, as a part of lucrative trading in the area from the British. During the War of 1812, between the United States and Great Britain, some Indian tribes allied with the British to stop the westward expansion of the United States and to regain lost Indian lands. On August 15, 1812, more than 50 US soldiers and 41 civilians, including 9 women and 18 children were ordered to evacuate Fort Dearborn. This group, almost the entire population of U.S. citizens in the Chicago area, marched south from Fort Dearborn, along Lake Michigan until they reached this approximate site, where they were attacked by about 500 Potawatomi. In the battle and aftermath, more than 60 of the evacuees and 15 native Americans were killed. The dead included Army Captain William Wells, who has come from Fort Wayne, with Miami Indians to assist in the evacuation, and Naunongee, Chief of the Village of Potawatomi, Ojibwe and Ottawa Indians known as the Three Fires Confederacy. In the 1830’s the Potawatomi of Illinois were forcibly removed to lands west of Mississippi. Potawatomi Indian Nations continue to thrive in Michigan, Indiana, Wisconsin, Kansas, Oklahoma, and Canada, and more than 36,000 American Indians, from a variety of tribes live in Chicago today.”