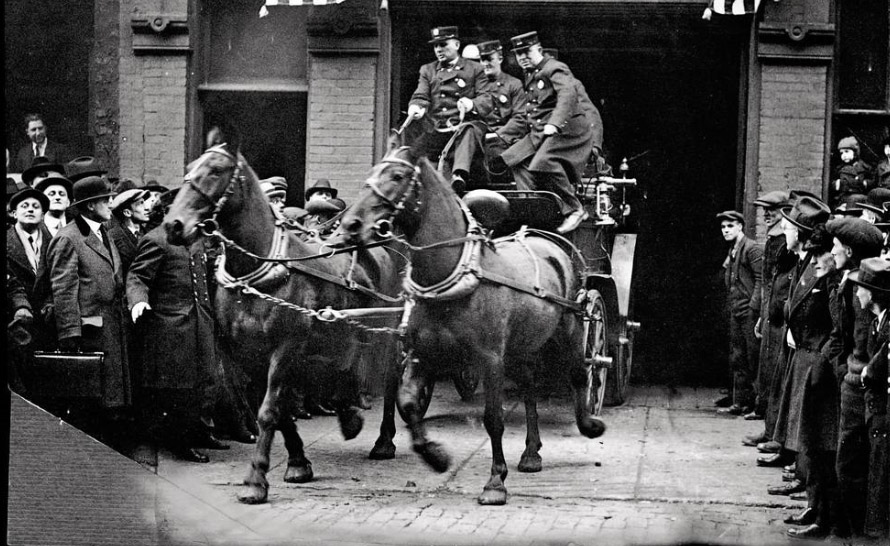 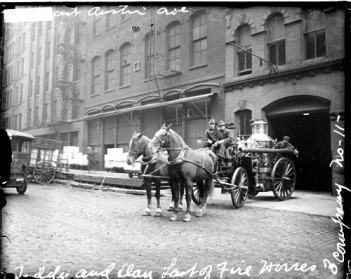 The horses were very well trained. The horse stalls were positioned adjacent and close to the fire rigs. When the alarm would sound the stall doors would open and they would position themselves so the harness could be quickly applied. 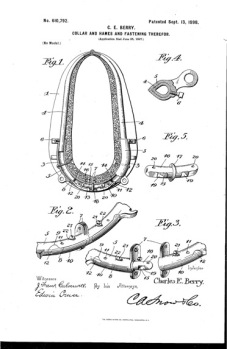 In 1871, a quick hitch was developed. Two years later, Charles E. Berry, a Massachusetts firefighter, created a hanging harness with quick-locking hames. His invention was so popular he left the fire department and sold his patented Berry Hames and Collars nationwide. It allowed firemen to quickly hitch the horses to their fire engine, truck, or hose cart.

The special harness would drop and the brave and daring horses was ready to race to the fire. Teddy and Dan pulled the old steamer engine. Buck and Beauty was assigned to the hose cart. The swinging doors on Grand Avenue were opened and the horses responded for the last time, North along State street to the alarm box.

While Engine 11’s horses were gone the new motor fire truck, one of almost 250, was backed into the firehouse. Over 7000 horses were still in service in 1914, down to 350 as of 1921. And in 1923, the motorization of the Chicago Fire Department which began in 1917 had been fully accomplished. The era of the fire horse was over.

The steamer engine drivers took a cheer from thousands in the crowd on the return to the firehouse and then the horses were taken to the stables at the House of Correction.

The fire commissioner at the time, John F. Cullerton intended to ask the Chicago city council that the horses be sent to agricultural schools where they could be cared for by students. He said “ They served faithfully and deserve a better fate then being sold to someone who might work them to death.” 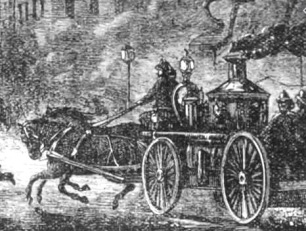 A fire horse on duty had to be ready to go at all times. When the fire bell would ring, many would kick the stalls the moment they heard the call. The animals needed to be strong, fast, swift, agile, obedient,  fearless and not easily spooked by the confusion of a fire. At the scene, they needed to stand patiently while embers and flames surrounded them. They needed to remain calm while the firefighters fought the blaze in all weather conditions and in the midst of distractions.

Firemen lived with their horse team day and night. They grew to understand them and there was a very special bond of affection. A fire horse was well cared for and even pampered. It is reported that it was cost over $3,600 per year per horse for food and care. The city council finance committee once complained that horse mattresses of hay cost $15-$20 per ton when straw could be had for $5.

Chicago fire horses were selected and trained carefully. Typically they could be either stallions and mares, weighed 1450-1600 pounds and measured 16-16 ½ hands high. Teams were matched in size, color and general appearance when possible. In 1898, Eugene “Owney” Sullivan was in charge of the fire department horses. At that time he paid about $110 each from wherever he found suitable candidates. About eight years was the average active life of the fire horse. He goes into service seldom younger than 5 years old and by the time he is 14 or 17 he is usually ready to be retired. At best, a fire horse served about 11 ½ years. Each horse had to demonstrate energy, intelligence, speed and endurance.

In 1871 there were 17 horse drawn steam powered pumper engines. At the end, there were some forty fire horses that were retired from the department.

And in years past there were some outstanding Chicago horses:

There was Jess and Tom. Rodney pulled the Chief’s buggy, Tiger worked at Engine 17’s house at 558 West Lake Street. Noble was considered the best and strongest fire horse in the Chicago Fire Department, assigned to Engine #5 at 328 South Jefferson. Texie pulled Hook and Ladder Company 18 in 1914.

And then there was the horse at Engine #6 located at 535 Maxwell. I cannot repeat his name here because it is was and still is a very offensive racial slur. Nevertheless, he was a great horse until one day when he dropped dead of a heart attack while at a fire hydrant.

Babe at Engine 105 learned to pick a lock. 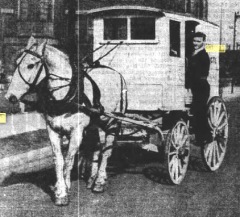 Billie, retired from fire service in 1923, was still at work at over 20 years of age, pulling a Wencel Dairy milk wagon in 1935.

So, if you still ask “what do fire horses have to do with this Chicago website featuring cemeteries?”

Peter F. Quinn, the horse veterinarian for the Chicago Fire Department died on December 13, 1931 at age 81, having retired twenty years earlier. and was buried in Calvary Cemetery, Evanston.

The fate of most other horses however are mostly unknown. Buck and Beauty were reportedly sold to a country pastor. Others around the country have actually been given a suitable cemetery burial.

On a gentle rise near the southernmost tip of the District of Columbia. 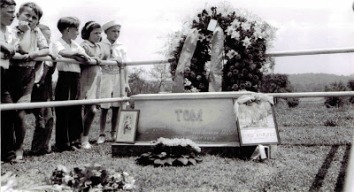 A large monument of Indiana limestone was engraved with “In Memory of Tom, Last Horse in the D.C.F.D.”. Tom was buried on a warm summer day in 1937. A final tribute was sounded: 27 notes on a fire engine gong, one for each year of Tom’s life.

I am currently looking for any marked grave for a Chicago fire horse.

The era of the Chicago fire horse ended on February 5, 1923 but the fire department continues to serve us well each and every day. The horseless apparatus today is some of the best and advanced technology ever devised. 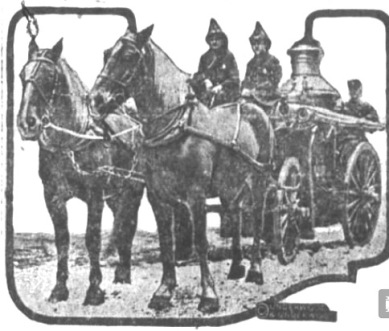 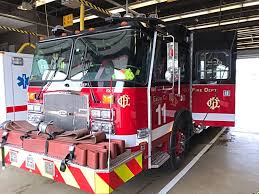 Thank you all for your dedication.