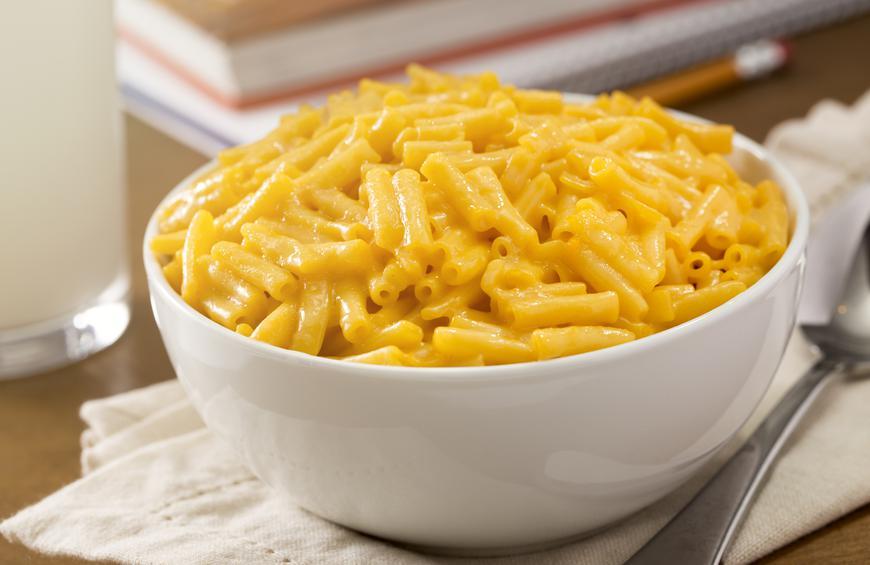 Thanksgiving is our special time to give thanks for all we have and enjoy turkey dinner with friends and family. But today I connect that popular blue and yellow box of mac and cheese to the story of a Chicago area cemetery.

During the Great Depression, a St. Louis, Missouri salesman, Grant Leslie had the idea to sell macaroni pasta and cheese together as a package, so he began attaching grated cheese to boxes of pasta with a rubber band. In 1937, Kraft introduced the product at a perfect time when rationing of milk and dairy products, an increased interest on meatless meals, and more women working outside the home, created a great opportunity for the product to succeed.

Kraft Foods was begun by James Lewis Kraft. Born 11 Dec 1874 in Stevensville, Ontario, Canada in 1874, he immigrated to the United States in 1903 and started a wholesale door-to-door cheese business in Chicago; Kraft was joined by his four brothers to form J.L. Kraft and Bros. Company in 1909. Today, it is split between a huge North American grocery business and a faster-growing global snacks company. The snack company, Mondelēz International Inc. is recognized as Kraft Foods’ legal successor, while the grocery company was named Kraft Foods now a part of Kraft Heinz.

But now for the cemetery connection:

Since 1939, Kraft Foods was headquartered in Chicago at 500 Peshtigo Court on Chicago’s lakefront near Navy Pier.

Decades later, Kraft Foods, (as in mac and cheese), set out to build a new corporate headquarters on Waukegan Road, just a bit north of Willow Road in Glenview, Northfield Township. To their dismay, they discovered that a cemetery had been first on the land that they chose to build upon. In the Spring of 1988, Kraft Inc announced plans to move the cemetery because it was “in the way” of the proposed office and research center. A common problem, older cemeteries are in constant danger of being moved, forgotten or destroyed in the interest of progress and the Kraft site was no different.

On the Kraft site is the Russell Family Burying Ground   (Also known as: Ceperley, West, Reid, Squires, Wing family burial grounds) And it was there first. It was small, only .36 of an acre, on a low hill, about four hundred feet east of Waukegan Road. The cemetery is at the north end of the Kraft Foods Research and office complex.

The Russell farm was once owned by the Society of the Divine Word who turned the old Russell barn into a temporary chapel. The newly formed parish was first known as Holy Ghost, and then later became Saint Norbert’s.

Until 1988, the cemetery was in very poor shape having suffered from years of neglect and vandalism, many gravestones were missing, damaged, or otherwise disturbed from their original locations. Large holes had been dug throughout the cemetery by woodchucks, Although somewhat shy, I saw one scurrying about while attempting to map the cemetery.

Russell cemetery is known to contain members of the Ceperly, Russell, Reid, West, Squires, and Wing families. Although commonly called Russell Cemetery, it appears that the Ceperlys were the first family to use the location as a burying ground. Louisa Ceperley died January 22 (1846) and is buried here. Another early stone marked William (last name unknown) died June 16, 1846 at the age of 7 years, 6 months, and 8 days. The eldest family members were John Russell, born New York in 1763 and his wife Sarah, born New York 1771. Both died between 1850 and 1860 and are buried in Russell Cemetery.

Four sons were born to John and Sarah. The eldest was Jacob, a charcoal burner from New York, who came to Chicago in 1834. Although his son Menzo is buried in Russell Cemetery, Jacob and his wife Eliza are buried in Deerfield Cemetery along with some young children of Menzo. The next son was David, born Ohio in 1800. The third son was William J, born 1806 and the fourth son was John J Russell. He was born in August 14, 1810 in Sharon Springs, New York. He emigrated to Chicago, arriving on February 14, 1836. He purchased 160 acres of timberland, land which is now Rush‑Presbyterian Saint Luke’s Hospital. He sold the property and moved to Northfield Township in the summer of 1837. His wife was Ann Eliza Legg born 1813, Kentucky.

Government records show nine purchases of public lands in Northfield Township by the Russell brothers, the first being on January 23, 1841. At least 720 acres were purchased between 1841 and 1845. Other purchasers of land in the immediate area were Constant W. Squires, Henry West, and Fred Read. The first land transaction at the Cook County recorders office was William J Russell receiving a warranty deed from John J. Russell for 119 acres on November 18, 1845. Many other transactions followed including David Ceperley purchasing 30 acres from John Russell on February 16, 1860.

The first known Russell burial was Eliza who died on October 9, 1851 at the age of 17. Based upon the stones inventoried in 1988, there is evidence of 19 Russell burials, 2 Squires, 4 Ceperleys, 2 Wests, and Charlotte Russell Wing. It is certain that other burials were made but their record is lost due to vandalism and unmarked gravesites. Wooden crosses and markers, common for the period, have long since disappeared. The last known burial in the cemetery is that of Margaret Russell who died June 20, 1924. Her father was David Russell and her husband was Menzo Russell.

In April, 1988 after much research by local historians and publicity, Kraft withdrew their request to move the cemetery, deciding to build around it.

The cemetery would survive. It was transcribed and mapped in the Spring of 1988 by Barry A. Fleig. The map was made a part of extensive and detailed report to Northfield Township, prepared by Bruce Allardice, an accomplished historian.

As a postscript, James Lewis Kraft died 16 Feb 1953 at age 78 and is buried in Memorial Park Cemetery, Skokie, Cook County, Illinois, about 4 miles and 12 minutes from the Russell Family Burying Ground. 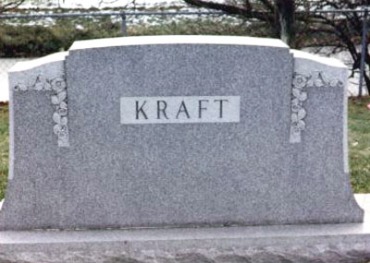 Feel free to have a mac and cheese dinner after all the turkey leftovers become history. Take a moment to remember your family members who are no longer with us and are not at the thanksgiving table. A Happy and Blessed Thanksgiving to all my readers and friends!

One thought on “Mac & Cheese and a Farm Cemetery”