Israel Balaban (1862-1931) a Jewish immigrant arrived in Chicago in 1882 from Odessa Russia along with his wife Augusta “Goldie” Manderbursky (1868-1936). They opened a grocery store and fish shop on Chicago’s famous Maxwell Street. They and their five sons and  daughter lived in the back of the store.

They began in 1908 by leasing the 100-seat Kedzie Nickelodeon at 3204 W Roosevelt Road. This modest place simply had folding chairs but introduced movies paired with live entertainment. In the early years, A.J. (Abe) would take tickets and perform, sister Ida would sing. Brother John played music a phonograph to attract customers out on the street..

18 months later, In September of 1909, they opened the 600 seat Circle theatre, complete with a balcony at 3241 W. Roosevelt. Then came the  Central Park Theatre at 3535 W. Roosevelt with 1780 seats. With their success, the family soon moved into a fine residence on facing Lake Michigan, a far cry from their Maxwell Street start.

The Balaban and Katz theatre chain was born and grew quickly. By 1924, with five theatres opened they had over 12 million patrons and $5 million in ticket sales.  At their peak The Balaban and Katz families opened or operated almost a hundred elegant theaters in the Midwest.

These were incredibly ornate theaters, such as the Chicago Theatre on State Street, the Uptown Theatre at Lawrence and Broadway, and the Congress Theaters, filled with fine furnishings, antiques, and artwork. 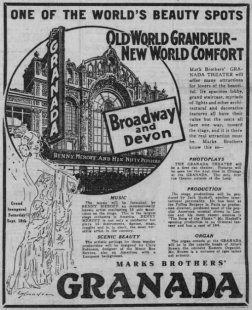 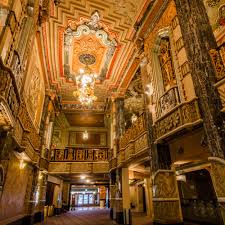 The biggest and best theaters in Chicago were designed by architects, George Leslie Rapp (1878–1941) and his brother Cornelius Ward Rapp (1861-1926). The firm was well known as one of the leading designers of early 20th century movie palaces. They designed over 400 theatres across the country,

.Many of their theatres were known for exciting and lavish stage shows, which evolved from vaudeville. Barney Balaban perfected the concept of live shows and movies continuously running from 9:30 in the morning until late into the night.  Just a few of the stars who appeared in the live shows included Bob Hope, Jackie Gleason and Art Carney,  The  Marx Bros. Louis Armstrong,  Sophie Tucker, Ginger Rogers,  Benny Goodman, organist Jesse Crawford, and the orchestras of Paul Whiteman and John Philip Sousa, and so many more. 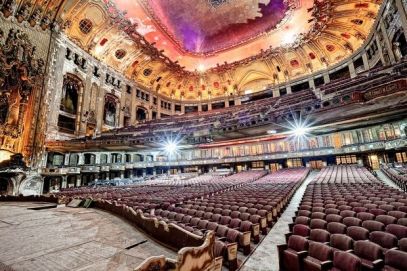 Balaban & Katz were the first to offer air conditioning in its theaters inviting Chicagoans into a cool place to escape during hot summers. Balaban & Katz became a subsidiary of United Paramount Theatres, Inc.in 1948 after Paramount was forced to sell off its theaters.

If that were not enough success, they also became pioneers in Chicago television receiving a license in 1946 for only the sixth TV station in the United States. WBKB ( Balaban and Katz Broadcasting) later became today’s CBS station on Channel 2. The station aired some of the earliest programming including Junior Jamboree which later became Kukla, Fran and Ollie on NBC

So we honor both Balaban and Katz families who were so successful at entertaining Chicago. Most if not all are at rest in Jewish Waldheim Cemetery in Forest Park,  why they are the subject of this cemetery blog.. 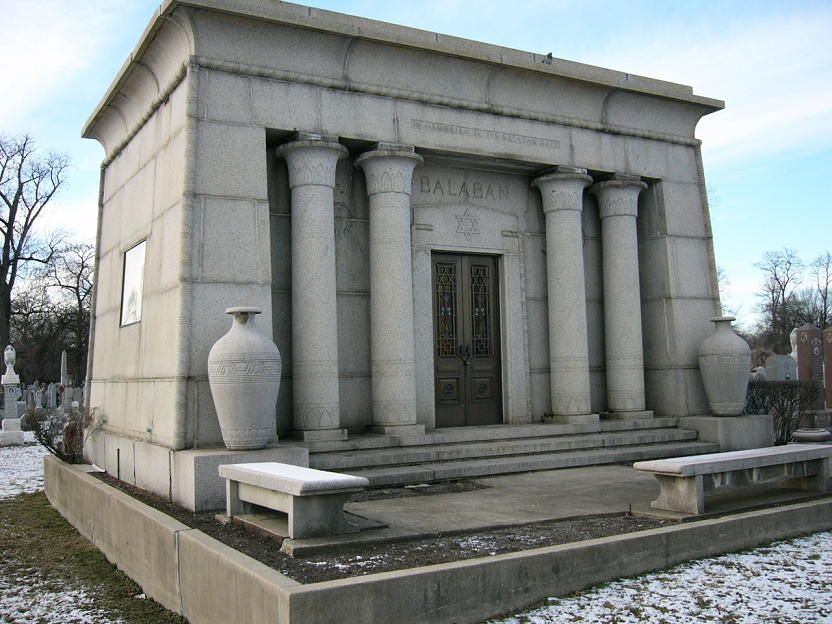 The Balaban family erected a mausoleum  within Anshe Kanesses Israel No. 1 (Jewish Waldheim gate number 25) The concept of a mausoleum or structure for the dead began with King Mausolus, an ancient ruler who died 350 BC His widow built him a tomb at Halicarnassus in Southern Asia Minor now Turkey.

The imposing Balaban mausoleum designed by Rapp and Rapp was first built for Ida Balaban (1891-1922), the sister of the five brothers,  Barney, Abe, Max, John, Harry, and Elmer Balaban. She was the wife of Samuel Katz. Ida sadly died young of tuberculosis. We owe the Balaban and Katz families a debt of gratitude.

6 thoughts on “The Golden Era of Chicago Movie Theatres”