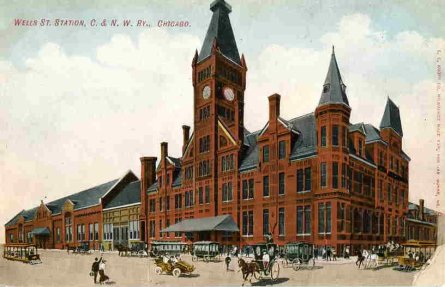 I take you to Wells and Kinzie streets on the north side of the Chicago River, We are at the massive Chicago & Milwaukee Railroad depot,  later known as the Chicago and Northwestern depot.  (It was since replaced by the Merchandise Mart and a new station built at Madison and Clinton). We board train Number Thirty-One, just one of fifty-five daily Northwestern trains.  What makes this train very different and special is that it is the daily Northwestern funeral train leaving Chicago every day at 12:30 PM sharp including Sundays bound for two cemeteries. This route dates back to 1857.

There are two different fare tickets. One regular fare for those the mourners riding in the forward cars and a special “corpse ticket” for the person in the baggage car taking his final ride to Rosehill or Calvary Cemetery. The person in charge of the body tenders a corpse ticket to the conductor, the fare about double a regular fare,  On any particular day the baggage car can contain any number of coffins, as few as one or two, sometimes six, and often filling the entire car. For larger funerals an entire coach car can be chartered by the family for $15. Additional chartered cars are $12 each. The charter includes passage for the deceased.

Typically the funeral train consists of three coaches, a baggage car, and the engine. There 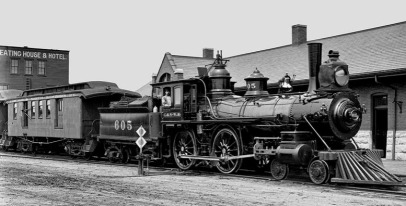 may be a second train when necessary. We leave Wells Street right on time, and a half hour later train number thirty-one arrives at Rosehill Cemetery station at 1 PM and then at Calvary Cemetery at 1:06 PM. It continues, mostly empty on to Highland Park arriving at 1:55 where it is turned around for it’s return trip. At 3:06 PM it picks up the Calvary Cemetery mourners who have finished burying their loved one. It does the same again at Rosehill at 3:15 PM arriving back in downtown Chicago at 3:45 PM.

The Rosehill Cemetery stop originally began as Chittenden Station , named for the “town” of Chittenden, most of which was later sold to the Rose Hill Cemetery Company. The September 16, 1857, issue of the Chicago Tribune wrote: “Today one hundred and fifty lots are to be sold in the town of Chittenden, at Auction… Chittenden is the first station out on the Milwaukee Railroad, four miles from the city and presents many inducements to those desiring a residence near, but not in the city.”

Early trains to Rosehill about 1859 only brought visitors to pay respects to the dead. Those early trains were scheduled to not “interfere with business”. They were advertised to leave Chicago each Wednesday and Saturday at 3:00 PM arriving Rosehill at 3:15 PM, leaving Rosehill at 4:45 PM for the return trip arriving Chicago at 5:00 PM.  This allowed for just 1 ½ hours of visitation, possibly a blessing during a cold Chicago weather. 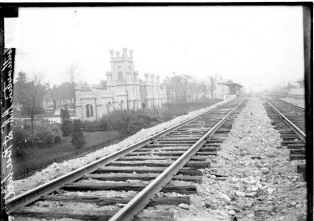 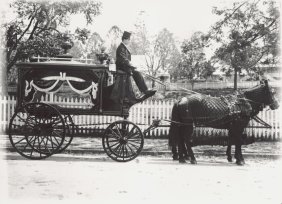 Without a funeral train, a trip to the cemetery was arduous by horse drawn hearse and carriages. There were several routes to Rosehill. The first was the “Rosehill and Evanston Gravel Road” extending north from Clark Street. .A second route was the Lakeview Plank Road (now Broadway). Still another was the Prairie Road, later known as Little Fort Road which became today’s Lincoln Avenue, bringing the funeral procession through Bowmanville.  Lastly, there was Green Bay Road, now Clark Street.

Foul winter weather, bone chilling cold, rainstorms and rutted roads made for an unpleasant and long ride by horse and carriage making a funeral train much more desirable.

There was however a different flavor to the road trip.  It was written that North Clark street was referred to as “Funeral Avenue  and was  lined on one side with graves and the other with Roadhouses”. A Chicago Tribune article speaks of Clark Street as an “endless succession of saloons”.

The finest and largest roadhouse was opened at the intersection of Ridge and Clark by Mr O”Hern. He provided sheds for over 100 carriages. Another 15 or 20 other saloons along the street could accommodate more than 50 carriages each.  These roadhouses cleverly provided convenient and well placed watering troughs for the horses in front of their establishments. The driver would stop and the bartender invites all inside for a drink. The driver would often be given free whiskey for his cooperation.

So whether we travelled to the cemetery by funeral train or horse drawn carriage, the trip to Rosehill or Calvary was quite the exp 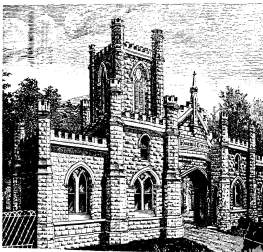 erience. I hope you enjoyed the ride. 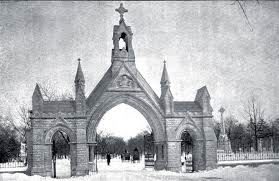