Here is a cemetery where those buried there deserve better. This is the story of Bachelors Grove,  most mentioned for its ghost stories and desecration. However this blog will focus on its history.  It is has also been known as: Everdon’s Cemetery,  Smith’s Cemetery,  Schmidt’s Cemetery,  Bachelder’s Grove,  Batchelor Grove, Batchelder,  Bachlor, Bachellor, and Batchel.  It is believed, and I concur, that the “Batchelor Grove” variation is the most historically correct and is the version found on the cemetery plat map in the collections of the Tinley Park Historical Society and the original plat for the Village of Bremen from 1853. 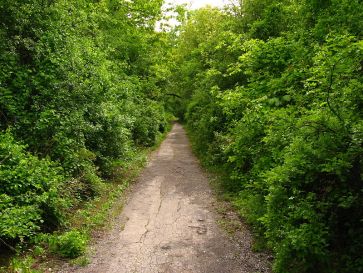 The cemetery is located  (144th street south and 6200 west) In the Rubio Woods Forest Preserve, on the south side of Midlothian Turnpike Road The path is one-half mile east of Ridgeland and one block west of the 143rd Street intersection. Follow a foot path which was originally a section of the old Midlothian Turnpike but closed to vehicle traffic since the 1960s.  Walk in about a block southwest into the forest preserve from Midlothian Turnpike Road. The cemetery will be on the right, alongside a small flooded quarry, once a source of stone for local roads.    The last remaining section of roadway known as Bachelors Grove Road, which ran between 135th Street and 143rd Street, was closed in December 1994. Cook County and the Forest Preserve District have followed through with their intended removal of the road. The fancy description is the Northeast quarter of the Northwest 1/4 of Section 8, Township 36 North, Range 13, East of the Third Principal   Latitude/Longitude: 413751N 0874615W.

The origin of the name Bachelor’s Grove has been explained  and confused by more than one theory. There were immigrant bachelors who lived in the area, there were three unmarried brothers seeking land title, and the Bachelder or Batchelder family who arrived in the area about 1845.

Stephen H. Rexford born about 1804 in Vermont, who settled at “the Grove” in 1833 or 1834, claimed the settlement was named for a group of four single men (including himself) who settled there, and thus “Bachelors” Grove. Historical facts seem to show this may be false, as the name was in use prior to their arrival.

Batchelor’s Grove began as early as the late 1820s through the 1840’s. The initial settlers were generally American “Yankees” of English, Irish, and Scottish descent, most of whom came here from New York, Vermont, and Connecticut. The second wave of settlers arriving from Europe, primarily of Germanic origin. The Batchelor’s Grove settlement encompassed areas in northwest Bremen Township, northeast Orland Township, southwest Worth Township, and southeast Palos Township.

One family that moved into the area was called ‘Batchelder’ and their name was given to the timberland where they settled. The settlement continued for some years as Batchelor’s Grove, until 1850, when it was changed to “Bremen” by postmaster Samuel Everden in recognition of the new township name where the post office was located. In 1855, it was changed again to “Bachelder’s Grove” by postmaster Robert Patrick but the post office closed down just three years later.

This small burying ground, for many years in rough condition, served the early German Lutheran and New England settlers of what is now Tinley Park and Midlothian.  Despite its condition, Batchelors Grove cemetery is one of the oldest cemeteries in south Cook County. It has been the almost constant subject of vandalism, stories of ghosts, the occult, and just plain neglect. According to Clarence Fulton’s reminiscences, The last “independent” cemetery trustee, Batchelor Grove Cemetery was like a park, and you could fish or swim in the adjacent quarry pond. Much like other area cemeteries, families would often visit on Sundays and have a picnic while visiting their loved ones buried there, a peaceful park-like setting with it’s proximity to the quarry pond.

The last “independent” cemetery trustee was indeed Clarence Fulton (1902-1984) of Tinley Park, whose family arrived in 1844, early settlers of Bremen Township., many of whom are buried in the cemetery. After his death, a large plat map of the cemetery was donated by his family to the Tinley Park Historical Society. A photocopy of a nearly identical plat map, with similar lot markings, was found in the files of the Cook County Real Estate Management Office. It is believed that both maps date to the 1870s. Both are believed to have been drawn by Eugene Franklin McClintock, who was a grandson of Thomas McClintock, an early settler at Batchelors Grove. The original map at the Tinley Park Historical Society, also believed to have been drawn by Mr. McClintock, give the boundary dimensions of the cemetery, but no point of reference to its specific physical location. Additionally, another drawing was donated to the Tinley Park Historical Society by the Fultons, which showed a plan for a new cemetery entrance off of 143rd Street after the Midlothian Turnpike was closed to vehicle traffic in front of the cemetery in the 1960s. This plan was never executed, presumably because easement through the surrounding Forest Preserve property could not be obtained.

One early burial reported is that of William B Noble in (1802-1837),  the earliest death date noted in the newspaper “Pioneers In Peaceful Rest, Bachelor’s Grove, One of First Cemeteries; Lies Serene, Undisturbed” that appeared in the Blue Island Sun-Standard published in Blue Island, Illinois on August 16, 1935. According to Ferdinand Schapper’s 1917 manuscript, Southern Cook County and History of Blue Island before the Civil War, the first burial in the Everdon’s Cemetery at Batchelors Grove was that of Eliza (Mrs. Leonard H.) Scott born 1808 and died 1844. Other family members are located Zion Lutheran Cemetery, Tinley Park, leaving the ancestors and their remaining original markers at Batchelor Grove.

Cook County records show that the surrounding land was sold to the forest preserve district in 1924, but the one‑ acre burying ground was not part of the sale.       The cemetery is then under the supervision and responsibility of the Cemetery Trustees (under the Real Estate Management Office) of the Cook County Board

The County Board was approached by an aged Clarence Fulton in the fall of 1975 to take charge of the care and maintenance of the old cemetery. Mr. Fulton had previously requested Bremen Township’s assistance in caring for the cemetery in 1967, but had been turned down. He indicated that there was a Bachelor Grove Cemetery Association, but no official record appears to exist for the organization. In researching the history of the legal title to the cemetery at that time, it was determined that title probably still rested in the hands of the descendants of Edward M. Everden, since no deed could be found for the cemetery itself and subsequent deeds and property transfers specifically excluded the one acre cemetery. After clarifying the legal description and boundaries of the cemetery and obtaining clear title through condemnation procedures, Cook County assumed responsibility for the cemetery in about 1976.

The cemetery fell on hard times. The cemetery was a favorite hangout for area youth as a lover’s lane and for drinking parties. Once the cemetery became further isolated with the closing of the road, vandalism of the cemetery increased. There has been evidence of satanic rituals and attempts and arrests for grave openings from time to time, particularly in the 1960s and 1970s. Desecration and vandalism of the cemetery reached a peak in the 1970s. Many stones were maliciously broken, defaced, spray painted, and stolen.

It is believed that many of the missing stones have ended up at the bottom of the nearby quarry pond. In a newspaper article, Clarence Fulton indicated that some grave markers were found in Maywood  at the Cook County Sheriff Police Headquarters. Others were found in Evergreen Park, and even Chicago Police Headquarters. Whatever happened to these “recovered” markers is unknown. Mr. Fulton had noted that during those “turbulent” years, if they had been returned to the cemetery, they would only have been stolen again.

There have been dozens of articles about the cemetery in more recent times, however most have little historical value and focus on the demise or the alleged haunting of the cemetery.  Some say that it was once a dumping ground for gangsters during the prohibition days. There are no end of stories about blue ghosts, a lady ghost sitting on a tombstone,  and unexplained visions. It is claimed to be the most haunted cemetery in the Chicago area.  A story in the Chicago Sun‑Times of October 29, 1982 perpetuates the legend of a two headed ghost reportedly seen in the lagoon.  Locals will tell you the blue ghost is just ground fog common to the area.

.There are an estimated 200 burials in the cemetery. Much of what we know about the burials in Bachelors Grove Cemetery is due to the fine research done by Brad Bettenhausen, President of the Tinley Park Historical Society. Mr. Bettenhausen published his findings in the Fall 1995 edition of Where The Trails Cross. Subsequent research is partially based on his findings. The Tinley Park Historical Society houses many artifacts and much information on Bachelors Grove, including a permanent display in their museum.  Some major family names include: Fulton, McKee, Moss, Heil, Shields, and Hamilton. Some other names include McMurray, Hageman, Foskett, Flassig, Patrick, Moss, and many others. In the coming months this website will release a compiled list of burials, from a wide variety of sources.

The Blue Island Sun‑Standard  on August 16, 1935 contained many readings of stones that have long since disappeared. The cemetery stones were copied many times as part of a Bremen High School history project. It was transcribed in 1971, 1974, and twice in 1976. This information was compiled into a History of Midlothian that can be found at the South Suburban Historical and Genealogical Society Library. Also see “Where The Trails Cross” Volume 26 number 1, and Addendum to Bachelor’s Grove Cemetery in Volume 27 Number 1 . Lastly there is the Cemetery Census Series  – Master Index on microfilm and in soft cover available from the South Suburban Genealogical and Historical Society.

In the meantime we need to focus on more on cemetery history and respect for those buried within. Cemeteries are a rich resource and deserve our protection.