As much as I would like to concentrate on the larger and popular cemeteries in the Chicago area, there are so many wonderful and smaller burial grounds within Chicago and Cook county that deserve to be celebrated. Some are the cemeteries of our early settlers, who worked hard to farm the land and milk the cows, go to church, and quietly raise family. These cemeteries may not have unusual or headline grabbing stories, but they are so important to the fabric of our local history.  So this blog describes the quiet Immanuel United Church Cemetery better known back in the day as Hoosier’s Grove Immanuel Cemetery, now within Streamwood. 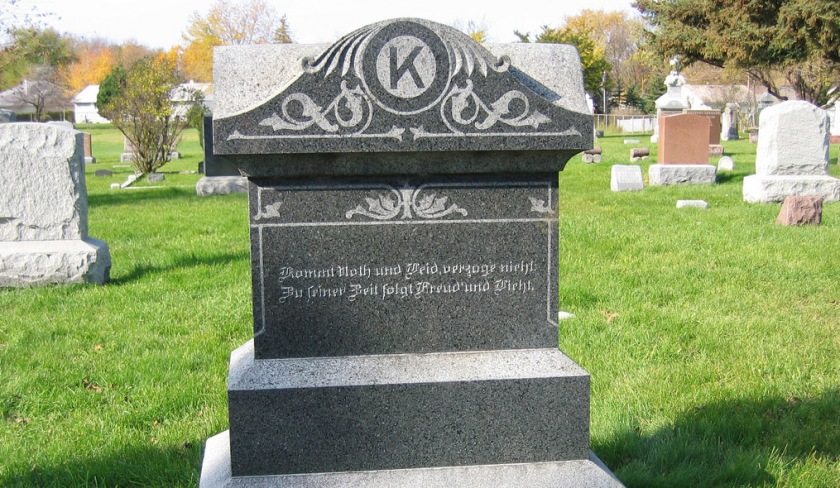 It began in 1852 the shadow of the little German Lutheran Church, of the Missouri Synod to provide a final resting place for its parishioners.

It is located on the north side of Roselle Rd. (Old Church Road), a short distance west of Barrington Road in Streamwood, Cook County, Illinois  within Hanover Township    In section: SW 1/4 SW 1/4 13 Township 41  Range:  9. Most of these people in Hanover Township hailed from upstate New York and New England. Ten years later, there were 926 residents, but a marked change in composition had occurred. Most were German Protestants from the Kingdom of Hanover in western Germany – hence the Township’s name. It was the rich land that beckoned farmers to this vicinity. 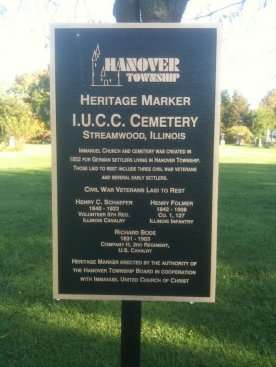 The cemetery has been copied and the records are in the Tichy Collection at the DuPage County Historical Society. . Arnett Lines partially read this cemetery June 29, 1963 and again by  Cathy Trawinski, in 1999. The records have been microfilmed by the LDS (film #1906282) and are on permanent loan at the Wilmette branch of the LDS library; The film provides data on the baptisms, confirmations, marriages, communion records, and deaths of members.  Hundreds of pages reveal the religious milestones of Bartlett/Hanover Township families from 1854 and in some cases such as confirmations until  the late 1900s. With few exceptions, records from 1854-1900 are quite legible. (Note: Burial records for the cemetery adjacent to the church appear to end before 1900.)

May they all rest in peace.

There are some great gravestone pictures at https://www.flickr.com/photos/barringtonhistory/sets/72157605090369288/