The festive Kinderheim Picnic was held annually at Lake Street and Addison Road in Addison Illinois twenty-eight miles west of Chicago. It was a scene of thousands of happy children and families, music, hymns, games, and a baseball game.

There was also a tour of the German Evangelical-Lutheran Orphan Home Association of Northern Illinois which hosted the event.

It was so popular that in 1890, five of Addison’s citizens formed the Addison Railroad Company and made an agreement with the Illinois Central Railroad to maintain the short two mile line connecting Addison to the Illinois Central Railroad that came out of Chicago. The very first train came to Addison for the Orphan Home Picnic on September 21, 1890. The picnic train doubled festival attendance from 5,000 to 10,000.

After a wonderful outing on that September day, the thousands of children and adults began boarding trains back to Chicago about 5PM. The picnic train was actually four trains, the fourth and last containing eight passenger coaches. About 7PM, that eastbound train was standing at the Kedzie avenue crossing and on the Chicago, Burlington & Quincy railroad tracks, only a few feet from the Douglas Park station, warned by semaphore of a danger ahead. About fifteen minutes later as the picnic train was about to proceed, disaster struck. A Chicago, Burlington & Quincy Downer’s Grove express train crashed into the rear car of that fourth section of the picnic train.

Festive had turned to disaster. Read on for the human toll.

Seven persons died, three of those were cousins, and at least eleven seriously injured just as when several hundred merry children and families were returning to Chicago after a festive day at the German Evangelical Lutheran Orphan asylum at Addison Park. 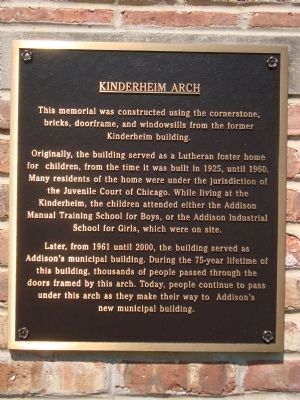 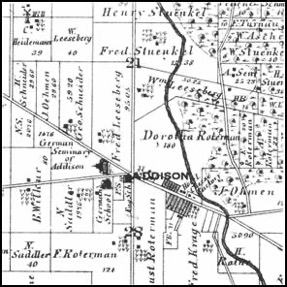 The picnic train, was at a complete stand-still when Engine #105 pulling the Chicago, Burlington & Quincy’s Downers Grove Express train #134 crashed with terrific force into the rear car of that fourth picnic train at thirty miles an hour.

It was described as an awful sight. The three rear coaches of the picnic train were telescoped. Beneath the debris of crushed timber and broken glass the groans of the dying and injured could be heard. The members of Chicago Fire Department Truck company No. 12 responded quickly, as did a Chicago Police patrol wagon carrying several officers to begin the task of extricating the passengers. The injured were taken out and carried to neighboring houses then later to the County and Presbyterian hospitals.

The engineer of the Burlington train claimed that the picnic train displayed no danger signals on the rear car, while his fireman, admitted that he did see one from his side of the engine, but the oil lamp was burning so low as to be almost indiscernable and could not be seen five car lengths away.

A few days later, there were three white coffins side by side in front of the altar of the German Luthertische Zions Church at 826 W. 19th.. The beautiful Pilsen neighborhood church on the Lower West Side of Chicago was built just ten years earlier featuring a 90-foot-tall bell tower, sturdy wooden doors, worn Chicago brick, and Gothic German script above the entrance. It well served the German immigrants of the area until 1956.

See the story of the church on a previous blog : https://chicagoandcookcountycemeteries.com/2020/02/13/this-church-is-a-ghost/

Each coffin was laden with white flowers as was the chancel and chancel steps. Reverend Wagner conducted the somber service to a very large crowd. 24 pallbearers, all girls wore white gowns white ribbons on their arms and white silk crosses on their dresses.

In the first coffin was Lillie Diener, age 16, the daughter of F.C and Lillie Diener who lived at 489 Ashland Avenue. She was the cousin to Margaretha “Martha” Diener and “Minnie” Pilgrim. Her funeral began at her residence before the church service at Zions . Later that day, she was buried Wunders Lutheran Cemetery at Clark and Irving Park Road on Chicago’s north side.

In the second coffin was Margaretha “Minnie” Diener, 19 years of age, daughter of Gustave Diener, and cousin to Lilly Diener and “Minnie” Pilgrim, She had been living at 608 West 20th. Her funeral also began at her residence, then placed along side her two cousins. Margaretha was buried in Concordia Lutheran Cemetery, Forest Park, Illinois.

In the third coffin was Lillie Wilhelmine Pilgrim, “Minnie” (also found referred to as Annie /Anna)

born June 10 1875, age 15 and lived at 718 West 21st Street, daughter of Friedrich Georg Wilhelm Pilgrim and Johanna Wilhelmina Pilgrim Diener/Dienner Wagner. She had a family funeral in the First Immanuel Lutheran Church 1124 S. Ashland and then was buried in Wunders Lutheran Cemetery at Clark and Irving Park on Chicago’s north side.

There were three others who died on that train disaster. Otto Schloeff (various spellings found), 18 years of age, living at No. 162 or 165 Center street.

Theodore Burger, age 17 or 18, born about 1870, had been employed as a bricklayer, He was the Son of Albert Burger who lived at 500 Hastings Street. Theodore was first taken to Jaeger Brothers undertaker parlor on 12th St. west of Halsted, then to his funeral at First Immanuel Lutheran Church 1124 S. Ashland.

Albert A. Otto, age 15, born about 1875, only son of a widow living at 259 Washburne Ave, also first taken to Jaeger Brothers undertaker parlor on 12th street just west of Halsted,  then his funeral at First Immanuel Lutheran Church 1124 S. Ashland.

We can learn from this accident that happened to so many children and young adults. We realize that life is fragile and can end abruptly for reasons we do not well understand. The lesson here is that we ourselves do not know whether there will be a tomorrow or a next week.

So while we are here, be very grateful for all the experiences that come across our path. Live well and strive to make a positive difference on this earth, so that when you move on, you shall have left a better world for those who follow.

Someone wrote “your life is your message to the world. Make sure it’s inspiring.”

And finally embrace your family, both those that are still with you and those who have passed.  It is all about family.

4 thoughts on “Children’s Picnic – then Horror”