I invite you to meet someone you should know. Meet Tony (Rosario) Manno, the owner of “Tony’s Pump Room”, (not to be confused with the real Pump Room in the Ambassador East Hotel). He was born Ventimiglia di Sicilia, Palermo, Sicilia, Italy on January 8 1894

Beginning 1953 or earlier, Tony sold hot dogs from his  white hot dog cart, an icon and fixture on Chicago’s North side. He and his cart moved around from time to time, selling at various intersections, He was often found at the corner of  Addison or Waveland and Lake Shore Drive, but sometimes at the corner of Addison and Ashland , sometimes on Southport, other times at Addison and Sheridan, or Irving Park and Sheridan. His Pump Room was mentioned more than once in the Chicago Tribune as the best place to find a real Chicago dog.

I know people, including my friend Franny, who swears  “The best hot dogs I ever had were from Tony’s Pump Room”. You had the choice of either the Vienna or Oscar Mayer frankfurter. Most of us would tell Tony “everything on”.

We don’t know a whole lot about Tony yet, when he died, or where he is buried, but we fondly remember him for being a champion of the “Chicago hot dog”.

But all is not well in Chicago, because our beloved hot dog sparks a fierce debate between the two types of Chicagoan’s, those who choose ketchup on their hot dog or those who defend the traditional yellow mustard.

Read on and take your side.

This most serious argument in Chicago, worse than politics,  is which condiment is correct to properly anoint the Chicago hot dog. The conventional wisdom dictates a non-kosher All beef Vienna wiener, slathered with seven compulsory ingredients: Mustard, white chopped onions, Tomato slice, a dill pickle spear, glow in the dark pickle relish, sport peppers, and the all important Celery salt, all piled on to a Poppy-seed bun.

But rebel Chicagoan’s loudly proclaim that ketchup, not mustard, should define the Chicago dog. For my personal safety I will not reveal my preference at this time. 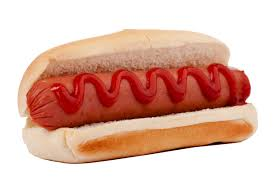 The debate, almost with religious fervor rages on:

Many will tell you that you are not really a Chicagoan if you put ketchup on your hot dog. Former President Barack Obama said that “once you’re past eight years old, ketchup does not belong on a hot dog”.

Mike Royko wrote, “…if someone wants to put ketchup on a hot dog and actually eat the awful thing, that is their right. It is also their right to put mayo or chocolate syrup or toenail clippings or cat hair on a hot dog”. A chef once said “I think there is a time and a place for ketchup and I don’t think the hot dog is one of them.”

Many mustard people say that ketchup on a hot dog is un-American.

And while we argue ketchup versus mustard, many will declare that a gently steamed bun topped with poppy seeds creates a nice, soft  blanket for the hot dog, supporting the all important and required “Chicago seven”.

Nobody is sure of why we have poppy seeds on a hot dog bun, possibly a visual element, maybe for a trace of flavor, or simply a holdover from the Jewish poppy seed bagel. Some complain they get stuck in your teeth. Others figure that poppy seeds are a mark of legitimacy, the hallmark of the Chicago dog.

Tony did himself proud selling more than just hot dogs. Next to his cart was an old fashioned pop dispenser, simply bottles of soda sitting in ice water. He even sponsored a Park District 16” softball team circa 1972.

In later years, he sold his dogs, fresh popped popcorn, soda, and hot peanuts in a bag, from a renovated Cretor’s popcorn wagon near Wrigley Field that was originally horse drawn before Tony bought it. . 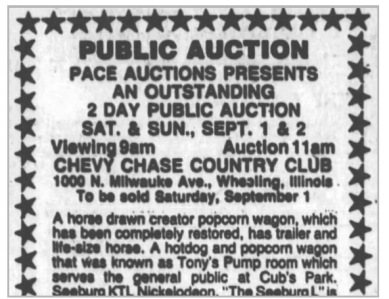 “The best hot dogs I ever had were from Tony’s Pump Room, a hot dog cart at the corner of Addison and Ashland and later on Southport.”

I’m good with all that except the peppers. I don’t remember them on the Chicago Dog. I used to buy them at Tony’s Pump Room, a cart near Lake Shore Drive up north…

Tony passed away on October 9, 1982 and now rests in St. Joseph Cemetery.

. I thank his nephew Mike Manno and Grandson Ron Licko for posting pictures of Tony. If any of you readers can add more about Tony Manno, his “Tony’s Pump Room” street corner cart, or the taste of his hot dogs, please add your comments or memories.

15 thoughts on “KETCHUP OR MUSTARD?”