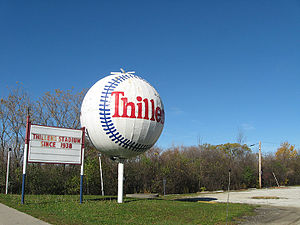 To a kid, it was Chicago’s own“Field of dreams”.

It was a miniature version of a big league ballpark just like Comiskey or Wrigley Field. It was complete with lights for night games, a public address system, grandstands seating over 2400 northside fans, concessions, an electric outfield scoreboard, an announcer’s booth and more.

It was Thillen’s Stadium at 6404 North Kedzie Avenue, the generous gift of Mel G. Thillens I1914-1993) and his company, the Thillens Armored Car Check Cashing Company. 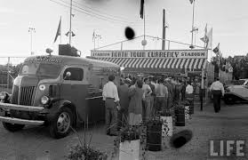 It was a place where some 17,000 kids could play Little League baseball every year at no cost.

And the deal was, if you could hit the sign of armored truck on top of the outfield scoreboard, you would win the $5000 savings bond. Three talented little leaguers did just that, hitting a baseball 300 feet. The place made kids feel that they were big league players at Wrigley or Comiskey.

Back in 1938, it was just a vacant lot. Mel Thillens  thought that youngsters needed a place to play ball. He spent over $6 million building the stadium where Jack Brickhouse, the WGN announcer, televised the Monday night games. 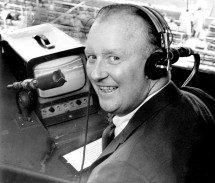 It was where the centerfield camera was invented, to better see the batter. That broadcast technique soon became standard in all major league games to this day. But wait, there’s more! North Siders could watch Eddie Feigner , the King and his Court play 16 inch softball and win most every game. There were celebrity baseball games where stars like Minnie Minoso, Michael Jordan, and others would raise money for charity. There was the Chicago Bandits fast pitch softball league. 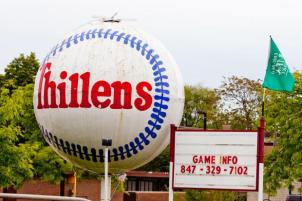 If you drove down Devon Avenue, you could not miss the place. Out in front was a huge rotating baseball emblazoned with the words “Thillens”,  it in itself had an interesting history. It was once the world globe spinning on a pole high above Boys World clothing store farther east on Devon Avenue at Maplewood Ave. The Stadium reportedly cost $100,000 per season to operate but was always offered rent free. 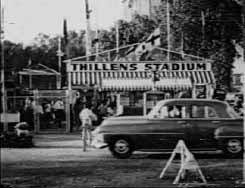 As expenses mounted, the Chicago Cubs baseball organization donated several million dollars to renovate it. It was reopened in 2006 for a time as “Cubs Field at  Thillens”. The park and the iconic ball was taken over by the Chicago Park District and both treasures slowly fell into a state of disrepair. 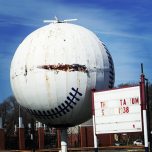 At the request of the Thillen’s Foundation who had so generously financed the park for over 60 years, all the Thillen’s signage was removed on June 13 2013. Under Chicago Park District ownership it was renamed “the Stadium at Devon and Kedzie” 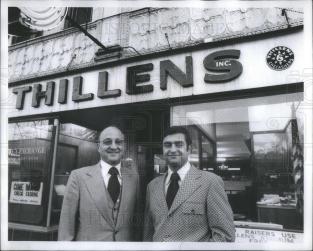 Mel G. Thillens died on December 20, 1993 and was buried in Montrose Cemetery on Pulaski Avenue, only 2 ½ miles from the wonderful Stadium that he built.

I want to think that on a warm summer’s night he can still hear the crack of the bat or  the crowd cheering on the little leaguers who benefited from his generosity.